The 's-curve' in composition 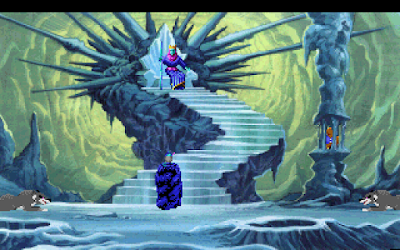 An extremely common element in composition is what artists and photographers often refer to as the 'S-curve'. This is where elements of a scene form a sinuous, winding path through the shot, often going back into the distance, but not always so. An excellent example is the above location from King's Quest V, in which we see a staircase leading up in a winding path to a throne. There's a few reasons this looks so good - the curving s shape is much more natural than a straight set of stairs, it balances the element so it exists either side of the centre line of the background as it travels up, and it adds a sense of distance, making the steps feel further away, because the path is longer - the shortest line between two points is always a straight line, and by curving this line, the path is made longer. This makes for a much grander set of stairs. 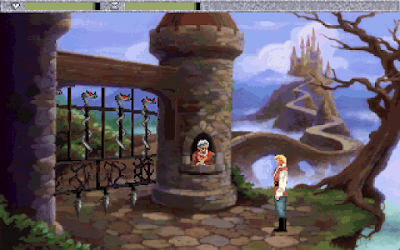 A great example of this is this path off into the distance in Quest for Glory 4. Here the path winds many times, making the journey seem long, and also making the path feel precarious. Aside from distance, it also makes the path more visually interesting - a straight path isn't very exciting to look at, and doesn't feel very 'designed'. This feels more elaborate and stylish; it's an interesting feature by itself, despite the fact that it's just a pathway. 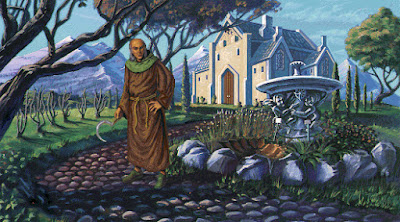 Even when we can't see the entire shape, the s-curve is useful, such as in this scene from Shannara. Here we can see just a single curve on the path, but the presence of the manor doorway in the distance suggests to us that the path winds back to the left (even though the door clearly opens onto grass). The detail of the fountain here provides a natural obstacle for the path to curve around, and acts as a nice layer for it to wind behind. 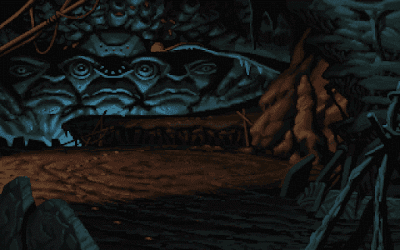 The power of suggestion is evident, again, in this scene from Full Throttle, where the foreground path isn't defined clearly as a curve, but has markers that sit on it to form one. This acts as a natural continuation of the curve that leads back into the distance, and completes the s shape nicely, while also breaking up the elements so that we're not just looking at a single road.

This Discworld 2 shot has an interesting idea, in which the path veers all the way from the centre of the composition until its right edge is cropped by the edge of the viewing area, and then comes back into frame. The foreground barrel also feels like a slight continuation of this curve - it cuts in right on the sweep towards us, and then takes it back to the edge again.

The Dig has a particularly interesting version here, because it's an example of an s curved path that traverses the screen laterally, rather than back into the distance. Here, as with the other examples, it lends a great sense of a dynamic design, as well as a natural feeling. This means that the full height of the scene is used for playability, rather than just one small section, as is common with pathways that run across the scene in adventure games, and makes for a much more interesting scene. 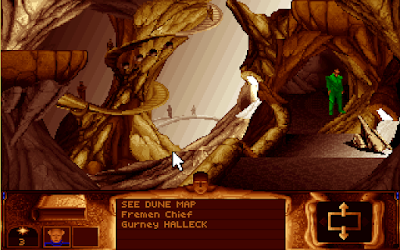 The curving, natural paths we've seen can also be shown to wind around a column as shown in this scene in Dune. Again, this adds depth, interest, variety and an interesting sense of balance to the scene, despite just being a background element. Stairs like this are particularly nice because we get to see both the lit and shadowed side of a pathway, adding in some wonderful value contrast to the element - a common thing to see in adventure game art.

Even more rigid shapes can benefit from this sort of approach - the stairs to the ground in this Beneath a Steel Sky background aren't curved, but still make an angular shape that veers right, then left, similar to the curves we've been looking at. The effect is similar, without ruining the angular, technological feel of the background. 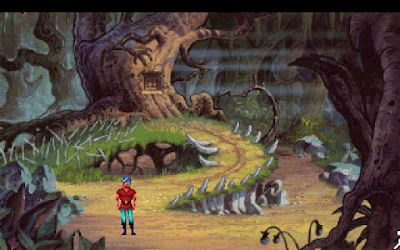 This scene from King's Quest V shows another approach, in which our curved path is balanced by the opposite curve of the tree above it, a nice complement to the shape beneath. When broken down into simple shapes, this curve is no different to the others - it's a dynamic s shape that balances nicely in the composition and adds a beautiful flow to the scene. It means that the scene isn't just a straightforward composition - it'd be simple enough to have a straight tree above a straight path, but this feels both more natural and more varied.

This scene from Sam & Max Hit the Road shows another interesting approach, where the shape of the curved path is continued by the curve of the fence beyond it. In thumbnail the two flow into each other, creating one big s curve that runs through the whole composition. The fact that they share a colour scheme probably helps this - they connect to each other quite naturally. 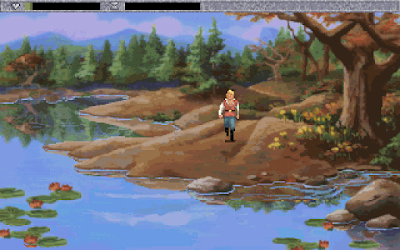 It's not just pathways that can wind off into the distance, either. This shot from Quest for Glory 4 shows a similar approach with the water and the land - the land juts out in curving sections that forms a nice, winding s curve as it goes off into the distance. Again, this adds a feeling of balance, of interest and of a natural environment. Water doesn't form straight edges often - it follows undulations in the land, as it does here. This is both more realistic and more beautiful. 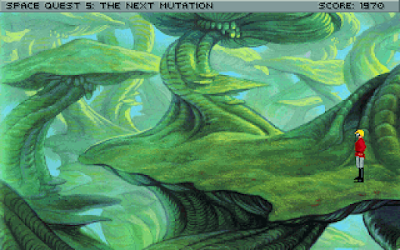 This Space Quest 5 background is another great use of the s-curve, with various different winding forms in the scene all working together to make a wonderfully alien landscape. Particularly nice is how the curve on the left frames the curving shape in the centre, leaving enough space for us to see it clearly, before then ducking back behind it at the top. This is a cool example of different curves working in unison, complementing each other and accenting each other's forms. 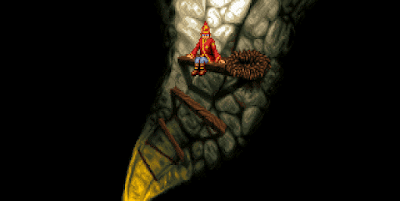 Even the slightest s-curve add to a scene, such as the one in this Simon the Sorcerer 2 scene. It's just the mildest curve down as we follow the shape of the chimney, but it feels much more interesting than a straight drop down would, and gives a greater sense of depth. The black framing helps to accentuate the shape, too, showing us the curve that goes directly from one side of the centre line of the background to the other as it descends. 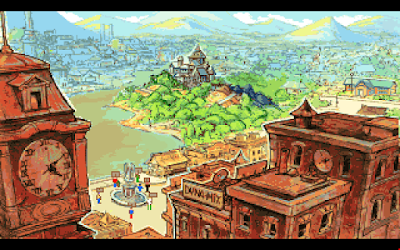 Even when there's no direct s-curve, the arrangement of elements can 'lead' a path through a scene in an s shape. This scene from Willy Beamish shows this - the closest element is the clock tower in the very far left, which then leads to the grouped mass of buildings to the right of the scene's centre line, which points to a fountain back to the left of the centre. The next prominent object is another grouped mass, back closer towards the centre, and then a lone, but clear, building back to the far right. Even though there's no actual path drawn between these elements, their placements mean they form an s-curved composition going back into the distance.

It's very common to see the s-curve in compositions of all types, and adventure game background art is no exception. It's a powerful device that can assist the artist in adding depth, variety and interest to their scenery. Whether shown by an actual pathway, or just the suggestion of a curving line through placement of elements, they're a fantastic tool to have in one's composition toolbox, and can really help to liven up or balance a scene.
Posted by Ben304 at 8:03 PM

Hi Ben, I spent some time in yr home town in 07, we stayed up playing retro games. You are such a cool guy. Im dl shard light and yr other games. Congrats on following yr passion and yr artwork is amazing. I look forward to many more adventure games youve worked on, its so great to see. take care man, Aaron