One of my absolute favourite colour schemes to draw with, green and purple complement each other in a mysterious, otherworldly way. Green is a fairly common colour in nature, with purple being more of a feature colour, seen mostly in things like flowers. Seeing the way artists play with the combination, though, is always fascinating, and there are some great examples of this colour scheme. 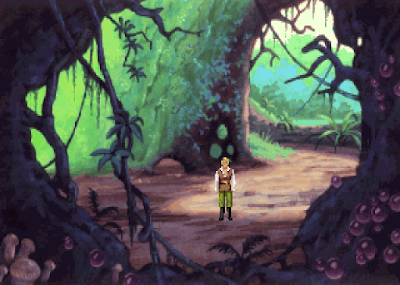 Because purple feels somewhat opposite to the warm yellow light of the sun, it makes an excellent shadow colour, which suits scenes filled with lush, richly lit foliage, such as this scene from Quest for Glory 3. The purple shadows really help the greens to stand out. Especially interesting here is the leaves in the foreground - though they appear greenish, these are actually a mid blue - only appearing greenish because they're placed with such dark purples. 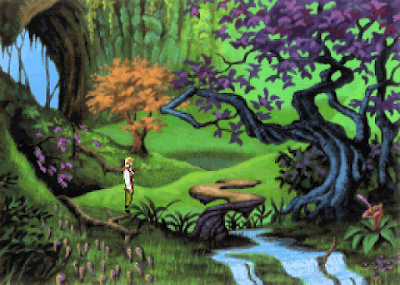 Another use of a purple among sunny green is as a nice feature colour to mix things up, as seen here. The leaves are nicely balanced, with the large patch in the top right corner evened out by the smaller patch on the left hand side, and a few smaller, individual details down in the bottom right corner. These work particularly well to break up the dominant greens, and add some wonderful variety and colour into the background. 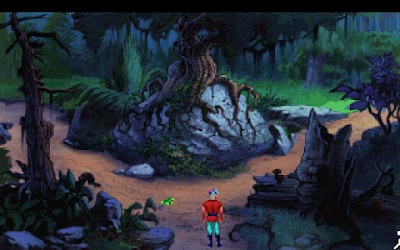 In less sunny scenes, such as this one from King's Quest 5, the greens become less sunny and yellow, and shift to much bluer greens. The purplish blues seem to tinge everything, from shadowed sections of the path, to stones and foliage. This makes for an excellent gloomy feel, without losing the feeling of being in a forest that greenish hues bring. 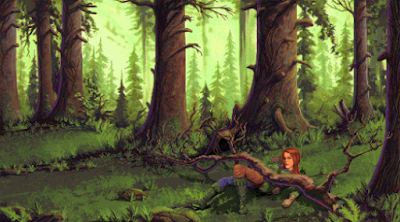 Another approach is to have the sunniest greens in the background, with the nearer greens less bright, as shown in this scene from Shannara. Here the purples are just the merest hint of a rimlight on the left sides of the trees - it doesn't feel as dark and gloomy as the ominous King's Quest 5 example, but isn't as sunny and cheerful as the Quest for Glory 3 examples, either. A nice middle ground, suitable for a deep forest, without being too sinister in tone. 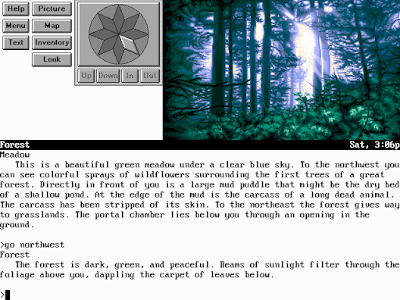 This scene from Gateway 2 still has a bright sky shining through the trees, but here it's a bluish purple. This light source means that the cool greens of the foreground leaves are well matched, in a very cohesive and beautiful colour scheme. The effect is still of a bright light, but less sunny and a little less friendly as well. Particularly interesting is that most of the darker colours are greens - an interesting subversion of the normal trend to make purples the darker colour in a scene.

This area from Indiana Jones and the Fate of Atlantis does the opposite - instead of putting a bright, glaring purple in the distance, we get a rich, deep bluish colour, with a large, shadowy mountain jutting up above us, and the greens are relegated to the grassy areas. This is more a case of the materials informing the colours, but the lack of the yellowish greens in the grass, coupled with the very deep purple sky, give a feeling of a heavy, overcast day. 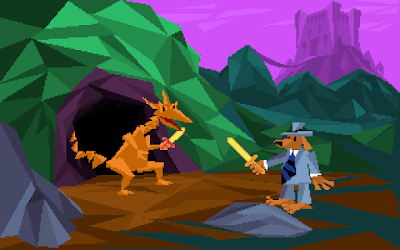 Sam & Max Hit the Road takes this to a fun extreme, here with a much more pink purple in the sky, and a very angular green feature in the foreground. This works for a VR simulation because the exaggerated colours make sense - It's easy to accept the massive, purple castle on the hill when it's delivered to us as part of a simulation. The greens and purples here make for a very nice complement, colours that might not work so well in a more realistic environment, but feel great here. 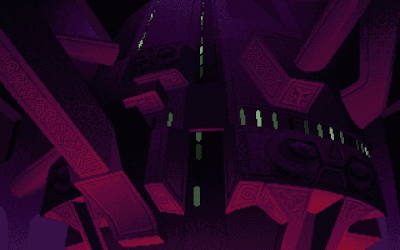 Fate of Atlantis also uses very warm purples in places - here the purples are being lit by lava, and so glow red in the planes where the light hits them the strongest, with bluer shades off into the distance. The green highlights really jump out here, and give the device an otherworldly look; the fact that this is an ancient machine running on mysterious energies is really represented well with the unnatural lighting from below and the presence of green lights - not a common feature in nature.

A third variant of this colour idea is evident in Fate of Atlantis, for yet another very different effect. Here the presence of stone walls is made more interesting by being lit by the eerie green lights, an interesting and mysterious change from the grey stone evident in earlier areas of the game. The purples in the shadows offset this nicely, and help some of the more interesting foreground details to stand out, while also making sure the mysterious feel of the lighting scheme is carried through into the shadowed areas. 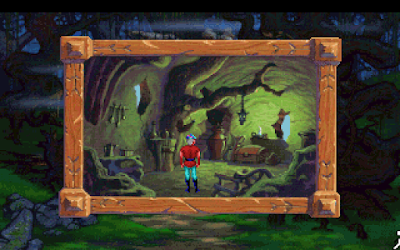 For this eerie interior in King's Quest 5, a sickly green light does the same thing to an even greater degree, as offset once more by vivid purple shadows. Like the previous scene, the lighting feels unnatural and mysterious, and conveys an ominous atmosphere to the scene. The presence of blue sky through the windows is largely ignored as a light source, helping the green to shine unchallenged.

This shot from The Dig shows another striking example of green and purple used in an interior, but here roles are reversed, with the highlights shown in vivid purple, the shadows in dark, rich greens, and just a hint of warmer green highlights coming through the distant tunnel sections. This is a very unusual lighting arrangement - there's really very few circumstances in nature, or even in modern cities, where this precise colour scheme can be observed, and as such it looks very alien to us - a perfect colour scheme to use for when exploring an alien ruin as we are here. 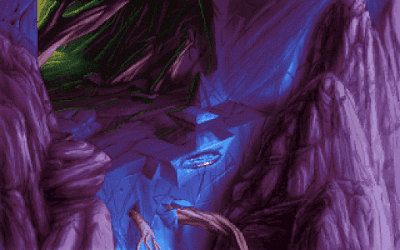 Green light light can also look very alien when shown to be very vivid. This bizarre green glow coming from the rocky cavern in The Dig is mysterious and unusual, and the purple rocks, offset by very rich blue and purple features, make this entire scene very unusual. I feel this scene is slightly unbalanced - the strong green really has no other greens to offset it - but perhaps an awkward lack of balance in an alien world is something that could be considered a feature, rather than a flaw. 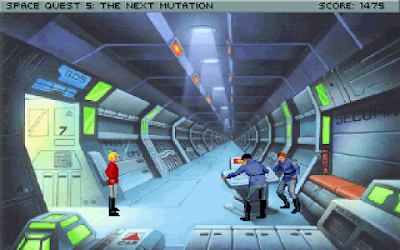 Here we have a shot from Space Quest 5 that shows us very bright green lights, surrounded with metallic greens and purples. The purple ceiling feels cold and metallic - a common look for science fiction corridors, and the green lights help to liven up the scene and break up the large metallic areas. This adds colour, without ruining the feeling of a technological environment, and also helps to balance the warm, green exit to the left of the scene. 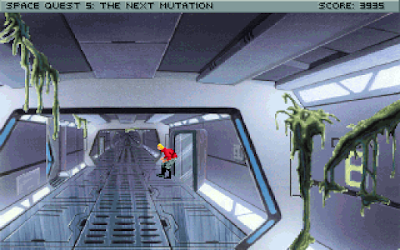 This is another great example, with the purple metal corridors broken up again - this time by much more organic, alien greens. The effect is very different, without losing the dynamic of being in a science fiction setting, and the much darker, less saturated greens suit the organic forms much better than the bright, electronic greens of the previous scene. 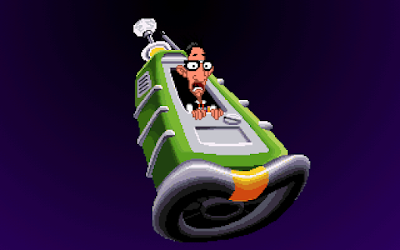 One final, rather iconic shot here, showing a green chron-o-john hurling through the vortices of time. What sort of backdrop colour complements a green shape, and also best represents the idea of a mysterious channel through time? Dark purple, of course.

Green and purple, then, is an excellent combination, useful for many different situations - especially for magical, or otherworldly applications. Whether describing organic forms, the idea of future technology, or a combination of both, it's a powerful blend of two hues that has a range of applications. It's a very useful colour scheme, and in the right situation, can give a game's scenery a great sense of atmosphere and tone.
Posted by Ben304 at 2:17 PM

And who were the two characters in the first scene in Day of the Tentacle? :D

Who were also present in Maniac Mansion! :D

There is an Episode of Babylon 5, where an Alien Race (The Draazi), seperates all of it's people into two groups, who fight each other merciless.
How do they recognize each other? By wearing a scarf. Either green or purple...
:D

Ha, that's funny. I guess it's normal to identify by uniform, but scarves are a very odd way of doing this. :D

I don't remember much more from this episode, except that funny concept of green fighting purple.
I think, they went up to a bucket, randomly grabbed a scarf, watched witch color it is, put it on, and got angry about the guys with the other color - crazy!
There might be a reason for this, but I don't remember...
Time for watching Babylon 5 once again :D

Still blows me away just how good some of these backgrounds look, even when scrolling through them in thumbnail form. Some of the magic has been lost with the passing of time and advancements in tech, and - as good as modern pixel art is - some of the games of the 90s still feel like they're in a league of their own.

Yeah, the cool thing is that these were done by professional, creative artists, and that even though they were scanned in at low resolution, and with low colour palettes, the skill and the vision that they had isn't lost in the limits of the day, really, and still holds up!