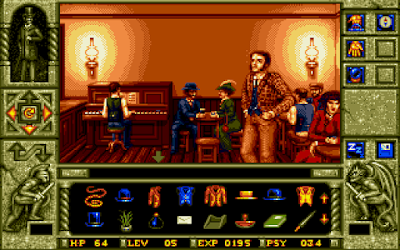 Framing interests me in adventure game art, especially when outside the actual piece of art itself, and separate elements treated as a frame, as it's not something I've done a lot of. It's fascinating to see what other artists have experimented with. Some games frame their scenery with large interfaces, such as Waxworks, shown above. Here we can see a large amount of interface that naturally frames the shot - with elements like the inventory down the bottom, various options to the right, and movement controls to the left. One particular detail I like is the character shown in the top left corner, showing the person whose story we're experiencing at this point in the game. 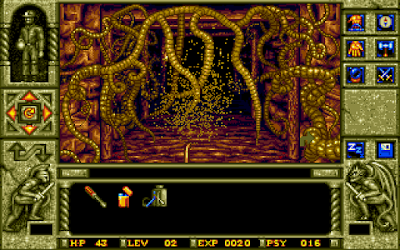 This character graphic changes depending on which story we're experiencing, as can be seen here, and helps insert some of the character into an otherwise fairly generic interface. It was common to show a static icon or portrait of your character in games where the view is a long way away, or when we see from their eyes. Along with the decorations, such as the columns and stone relief details, they help to give the interface a nice feeling of style. 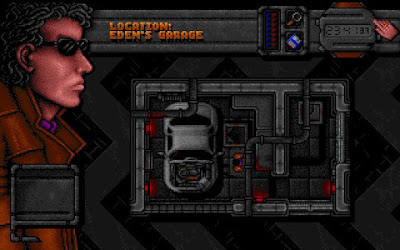 Dreamweb has the character portrait even bigger - our protagonist's constant presence takes up a pretty large section of the screen, and it juts out in an unusual silhouette. The actual framing of the scene, however, is mostly done by having the actual walls visible, and surrounding the rest with a vaguely metallic patterned texture. This acts as multiple levels of framing - the walls of the scene, then the backdrop of the texture surrounding, which is then framed by the GUI and portrait. This mostly works because of the very zoomed out view, and would probably be less useful for a more traditional sort of view.

Even the simplest of elements can help an interface that's framing a shot to feel more dynamic. The Dune GUI, shown here, breaks the otherwise straight frame with a sculpted figure whose silhouette breaks out of the frame and into the scene, an interesting and artistic alternative to the very common rectangular GUIs we're used to seeing. The fact that the figure's head looks up and down depending on our action helps this to feel more dynamic still, and helps the GUI and game from feeling so separate from each other. It might be a small connection, a minor intrusion beyond the boundary of the scene, but sometimes it's the little touches that count. 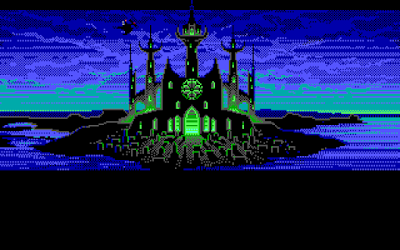 Loom, however, does the opposite. Here we can see the tip of Bishop Mandible's dark cathedral jutting out past the point where the letterbox frame - a very common way to frame an image - has its boundary. It's the smallest of touches, repeated often in the game, but it feels like a nice subversion of the image's frame - allowing this one particular element to jut out past the border of the scene feels like it's adding depth and interest to the scene. 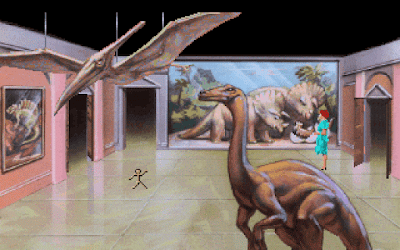 Sometimes this can be taken to the extreme - as shown here in Laura Bow 2. Rather than painting the ceiling in, an unimportant part of the image, the artists clearly chose to leave it blank, making the pterodactyl stand out very clearly. It's an odd way to present scenery, and perhaps not the best, but it is certainly an interesting approach to adding an artificial framing element in, rather than painting something that would be unimportant anyway. 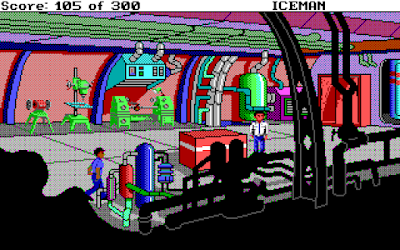 It feels a little more natural in Codename: ICEMAN, where the shape of the submarine we're in frames the shot, as well as some foreground elements. Here, rather than showing what's outside the scene we're in, they merely suggest the shapes of certain things, and deem the rest unimportant to show. This has the interesting effect of lending an interesting shape to the scene, redolent of submarines, and supports the art more nicely than the previous example. 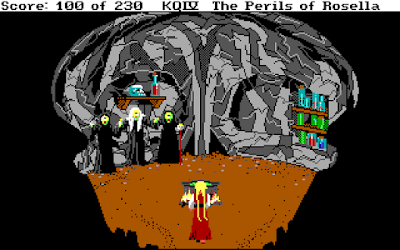 This can be taken to an even more interesting, evocative idea - such as in this cave in King's Quest 4. The sinister nature of the cave is conveyed wonderfully by shaping the black frame of it like a skull, well supported by the niches in place of eye sockets. I love that the artists decided to make the shape of a skull here - it's bold, inventive, and doesn't get in the way of actually playing the scene. A great way to have fun with the shot and add some creativity. 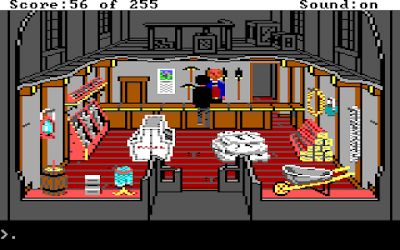 Another option, other than using pure black, is to use a difference in saturation to guide our attention. This shot from Gold Rush shows the artists greying out the unimportant elements, using the coloured areas to guide our attention to where we need to look. This is an interesting idea - it means that the framing elements get a lot of detail that help show the world, without taking away from the important parts we need to focus on. 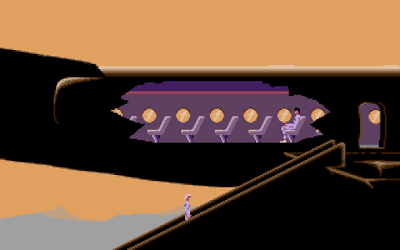 A really fun example of this idea is shown in this scene from Goblins Quest 3, where we can see one character looking in on another scene, and his presence acting as part of the framing of the shot. This is a really fun example - it not only shows two things at once, but does so in a fun way. I particularly like how the hands break the frame of the crystal ball, which breaks the silhouette of his face. 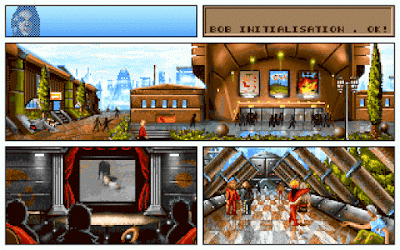 One particularly impressive - and bizarre - example is in the B.A.T. games, where we see multiple parts of the city at once. Within the frame that our mouse is focused on, we can interact and pan the scenery, while still being able to see wider shots of the city at the same time. This makes overall composition very difficult, as our eyes have many elements to be distracted by, but it definitely lends a unique feeling to the games, and presents us with an interesting alternative. The fact that each micro composition within a panel manages to be readable, stylish and evocative is very impressive, and really shows the power of strong compositions even around the thumbnail level. 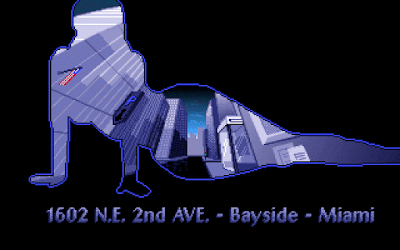 Perhaps the most bizarre and impractical use of interesting framing is in Fascination, where scenery is often shown as cutout elements seen in the silhouettes of various things that were somehow deemed relevant to the location - the shapes of books, cars, even the silhouettes of people, as seen here. This is such an odd approach, and rarely practical (would you believe that this is an actual playable scene from the game, with actual hotspots we have to click on?) but no doubt the artists had fun playing around with the idea.

Framing, then, presents many interesting avenues in which an artist can experiment. They're not always practical or useful, but for certain moments, or certain projects, framing a scene in an interesting way can add a lot to scenery. This is definitely outside of my realm of experience as an artist, but very much something I've admired and been interested in, and maybe there will come a time where I'll find an interesting use for such an idea. Until then, I'll simply keep an eye out for examples like these, and collecting as many interesting variations on the idea as I can.
Posted by Ben304 at 9:32 PM

Whelp. I somehow posted from another account and deleted that. I don't know what I'm doing here. Anyway! So happy to see when one of these goes up. Keep'em coming mr. 304!

Apropos of nothing, if and when you ever get those rights for making The Scar an adventure game, you have my axe. The best work by one of my favorite authors. I'm trying to space them out so I don't finish them too early - still holding out on Iron Council for YEARS now :)

But getting back to the topic, I so enjoy reading these posts. The internet isn't exactly brimming with information/inspirational stuff regarding adventure game art, and your analysis is always on point.

Though I doubt I'd ever be able to work on an adventure game based on The Scar, I appreciate the vote of confidence.

Glad you're enjoying the posts, too! Enjoying doing them a lot, and glad to know there's an audience for this kind of thing! :)