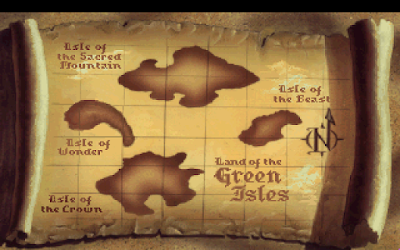 Travel is a very common element in adventure games - in fact, the name of the genre itself implies that some travel will take place. \'Adventure' brings to mind visions of heading to distant lands, seeking fortune, fame, or the resolution to some mystery. Unfurling a torn, tattered old map - such as the one shown above from King's Quest 6 - makes us interested in the distant new places we can see, and want to explore them. This isn't necessarily a limitation, of course - adventure games can successfully take place in a very small area. In times when they don't, though, we rely on maps to travel around. The map pictured above from Indiana Jones and the Fate of Atlantis shows the classic cinematic approach to showing a large amount of distance covered in a very short span of time - a line that tracks progress between destinations over a map. This is very useful when we're simply interested in our destinations, with little care for the voyages in between. 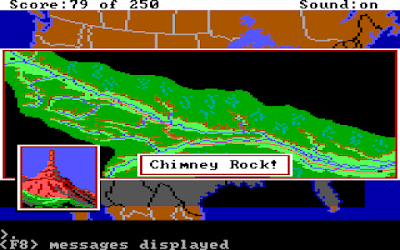 Of course, sometimes the journey is part of our adventure, as is the case in Gold Rush! Here the map is overlayed with closer depictions of smaller maps, showing more specific part of the historical journey, as well as small thumbnails depicting certain landmarks along the voyage. This attention to detail really helps Gold Rush's story feel grounded - we're passing known landmarks while plotting our course along this map, and this makes it feel more like a historical account. The fidelity here is pretty low, of course, but it's a decent way to convey the idea. 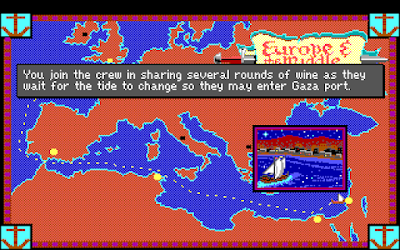 A similar idea is shown in this map from Conquests of Camelot. We plot our hero's journey across the sea, with little moments of narrative telling us what's happening without much visual information to convey it. This is a more zoomed out, abstract map, which has much less detail than the Gold Rush approach, but here the focus is placed on visibility - it's much easier to follow the course of the trail here, even without needing to see it in motion. We don't necessarily need to see each section of the journey closer along the way if that's a minor part of the story, as it is here, which is just a simple cut scene between sections of the game. 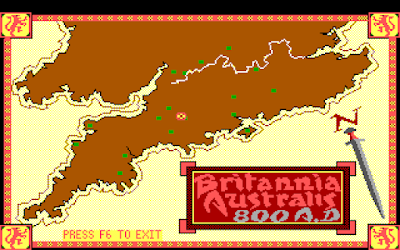 When Conquests of Camelot requires us to choose a destination ourselves, the view is zoomed in, but the level of detail hasn't been increased to show much landscape beyond the coastline and the river Thames in further detail and our various potential destinations. The focus here is on visual clarity rather than any sense of detail, a simple, practical approach. The inclusion of the label marking the area and date is a nice touch that reminds us more clearly of our setting, and also fills up a large area of otherwise unused space. 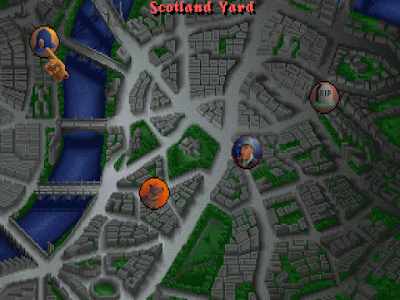 When our destinations are more limited, as in this map from The Case of the Serrated Scalpel, the artists are now much more free to put in more detail. Here we see the river Thames again, but now we can see the greenery on the banks of the river, the various bridges, streets, buildings, parks, and even detail to the level of the individual trees. We're also looking at enough of an angle to see a little bit of perspective, making the features feel more deep and solid. This approach requires the map to scroll, due to the much closer level of zoom, but makes the individual map markers stand out by making them colourful icons, a nice visual symbol that explains and reminds very quickly what each place holds for us. 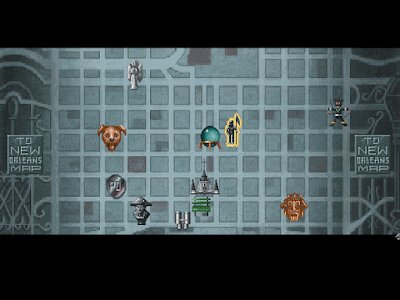 Gabriel Knight's map further abstracts the map markers from the map itself by merely showing the presence of city streets and blocks on the map itself. Here the markers themselves represent the only real details, but the nature of the map, as well as the slight variations in colour in blocks, suggests to us a real city with buildings and streets. This cements the idea that we're not necessarily looking to the map for a view of the city - it's merely a convenient way to travel large distances between two locations that interest us in a short span of time. 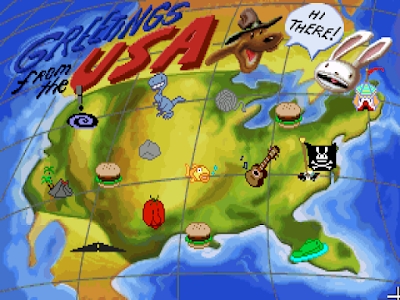 Sam & Max Hit the Road shows an even greater level of abstraction - here we get a zoomed out view of the United States of America with very few details - it's recognisable, but barely more detailed than the maps in Conquests of Camelot. Here our colourful icons stand out well, once again, showing us specific highlights of each area. At this level of abstraction, we're basically looking at an inventory of locations, merely given character by the colourful art. A particularly nice touch here is the suggestion of being on the surface of a globe because of the curving lines of longitude and latitude shown. The header at the top of the map also helps to establish the feel of a colourful, friendly tourist map, which really helps reinforce the road trip feeling of the game.

Simon the Sorcerer is an interesting example - we're still seeing icons here, but the art itself feels less like that of an actual map, compass directions notwithstanding. This almost feels more like an artist's sketch from a panorama of the entire area, which isn't how we're used to seeing maps presented, but still conveys the information well. It also gives an interesting sense of how the land changes, because here details like mountains and a forest seem more like drawn elements than zones or regions. I particularly like the way it's been drawn to look and feel like a crumpled old map that we've had folded up in our pockets - a very suitable look, considering the adventures Simon goes through. 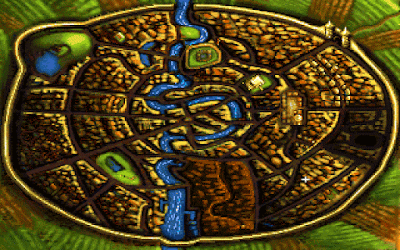 It's interesting to see this sort of change when comparing the city of Ankh Morpork between the first and second Discworld games. We see here the first game's approach, a view from directly above, that shows the layout of the city very clearly, but only hints at the nature of the buildings we need to visit very vaguely. It's a great way to show geography, but doesn't really sell the feeling of the city very strongly.

In Discworld 2 we're much closer to the action, and here we can see the buildings, the streets, and even fairly small details. This feels much less like a map than the way it's shown in the first game, but plays a very similar role, while giving a much more interesting, dynamic view of the city. It also gives the artists a change to play with colour - this feels like an interesting, moody panorama more than it feels like a simple, practical map, and is no less functional. 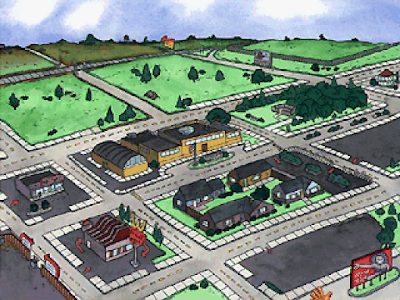 Beavis and Butt-head in Virtual Stupidity has a similar approach - the shot here feels like we're looking over the town from a hilltop, more than staring at the town's layout on a piece of paper. This feels more like a transitional shot between areas than it does a map, almost - a quick look at the entire town from afar, so we can easily pick our destination, then zooming straight in on that place once we select it. 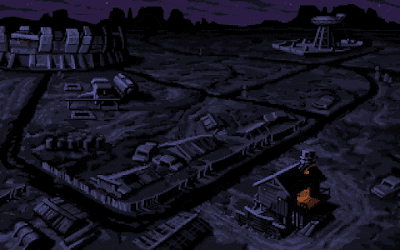 Full Throttle's long shot of Melonweed is a wonderful example of this - a moody, atmospheric landscape that shows the town, and shares the same wonderful night palette. This means we're barely taken out of the atmosphere of the game - the mood is consistent between each location and the map screen. Full Throttle's map works particularly well due to the interesting, unique shape of each of the buildings we need to visit in the town - they stand out as being iconic without the need for special icons or brighter colours - here it's mostly just variations in value, and then the interesting and iconic silhouettes of each structure do the rest of the work. 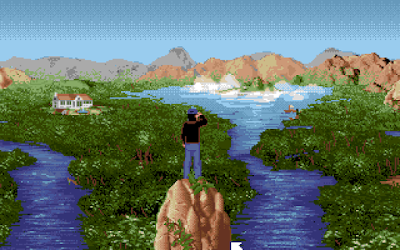 Flight of the Amazon Queen takes this a step further by not only presenting us with a panorama that we can pan to the left and right, but also shows the character himself atop a stone peak, looking out with us. A really unique and interesting example, here we don't even lose our connection with the character when choosing our next location. This is taking the idea of a "map" to its most personal form - it feels like the character is picking his destination.

The Secret of Monkey Island puts the characters into the map too - in a very different way. The map of Melee Island is initially just that - an overhead map showing the geography, with the locations cleverly lit up to show us clearly where we need to go. At the end of the game, however, the map becomes the backdrop to animated shots, where LeChuck punches Guybrush across the island, and then flies after him. A fun way to re-use a map for comedic effect, and a rather unique use for this kind of shot. 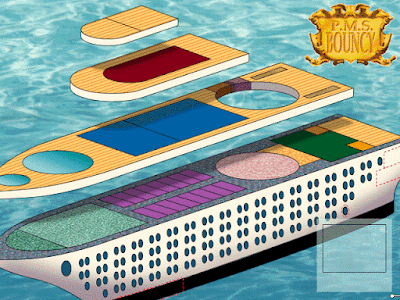 One last fun, interesting and unique approach is this cutaway diagram of the ship from Leisure Suit Larry 7. Because of the complex, layered nature of the ship, trying to show a map of it could pose quite a challenge. The artists here solved that challenge very neatly by producing the sort of cutaway diagram common in depictions of ships. A very sensible and functional way of representing a very complex set of overlapping locations.

Maps, then, can come in many shapes and forms. While the term itself brings to mind a very specific kind of image, artists have played around with them to make them more interesting, more atmospheric, and even more practical, without changing their original purpose. There's no real limit on how you can present a series of locations to the player, as long as the functionality is kept intact, and seeing how different people have approached the challenge of doing shows a great range of successful ideas that achieve a range of useful effects which suit a wide variety of purposes.
Posted by Ben304 at 8:32 PM

What do you personally use to draw your backgrounds, Ben, if I may ask?
Hardware/software wise?

For background art my main input device is a Wacom Intuos Art Pen & Touch in medium size, which I use in Photoshop Elements 14. When travelling I use a Microsoft Surface Pro 4, which has a decent pen (though slightly less enjoyable to use than the Wacom, I find).