Rim lights are formed by the positioning of a light source behind or beside an object. When the light hits the object in question we only see partial effect because most of the side facing us is still in shadow, and the fully lit side is further away from us. This is similar to the appearance of a crescent moon - when the sun is hitting one side of the moon (relative to us), we only see a small sliver of what we know is a full ball. When the light hits it from the same direction we're viewing from, we can see the entire face of the moon. 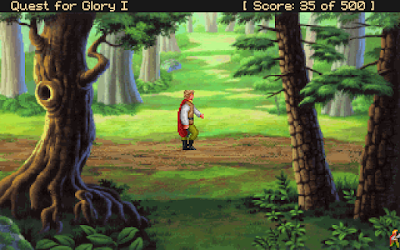 A common use for this is to show two different light sources, such as in this scene from Quest for Glory. The tree on the left has two clear edges being lit differently - the left edge is light by a warm yellow light that we can safely assume is from the sun, by the conditions in the rest of the scene and the colour of the light. The right hand side is lit by a blue glow, which we can assume is ambient light from the blue sky. Because the sky is bright blue, it's common to rim light trees in this manner when going for a realistic but mysterious look. The blue isn't totally foreign to our eyes, but the strength of it is unnatural and feels interesting and a little magical/foreboding. 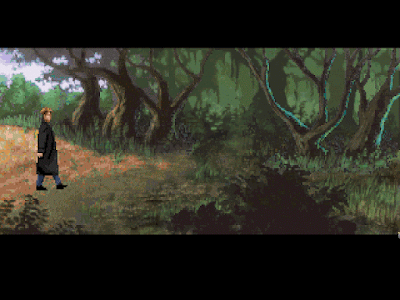 It's quite useful to show a transition in lighting conditions, as shown here in this scene from Gabriel Knight. On the left hand side of the image we have safe daylight, and the vegetation is lit accordingly. As we progress into the mysterious, wooded parts of the image, the trees are more strongly lit by a mysterious light source from the right side, and the light from the sun feels more light ambient light. This builds a great sense of foreboding, taking the focus away from the friendly light source that the sun represents and highlighting the less certain colours of a dark, wooded area. 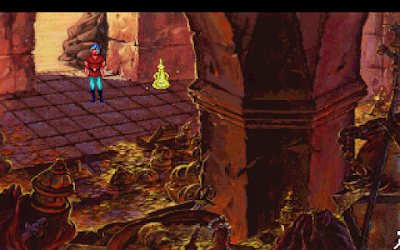 Rim lights are also useful in the case of a single strong light source. In this scene from King's Quest 5 the primary light source is the open doorway that's letting in the glow of the desert sun. The foreground objects glow with a vivid yellow on their edges, which really helps to highlight the strength of this light source, and relegate the rest of the lights that illuminate them to bounce lights from this source. Using rim lights in forms with quite close values and hues like this really helps to define the forms and masses well - notice how well the column and assorted other objects read, despite being similar in colour to the floor and walls behind them. This division of a light just visible on the rim really does a great job of separating them out and making them clear and readable. 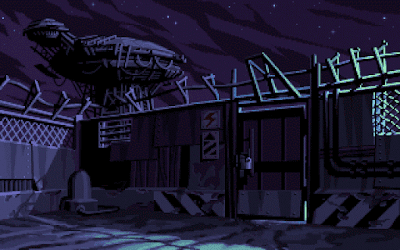 Another example is this scene from Full Throttle, in which the strongest light source hits the edge of the fence details really making them stand out despite the dark sky. This is also a great way to add strong highlights to an otherwise dark scene - lighting extremities helps to add diversity and definition without sacrificing the dark, shadowy feel needed for the scene. This also shows an example of a light source being more to the side than directly behind - notice how about half of the struts on top of the fence are lit, as compared to the much thinner rim lights we've seen before. 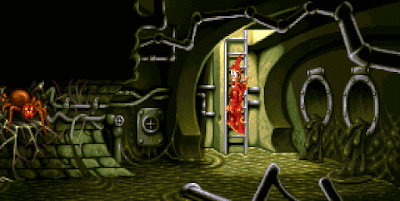 This scene from Simon the Sorcerer 2 shows a great use of rim lights to distinguish the foreground pipes from the dark scene behind them. Because the bounce lights here are also used for rim lighting, rather than diffused ambient lighting, it's also a way to add colour to what would otherwise be pure black objects. Notice here how the joins in the pipes also have rimlights that run along their circumference, as well as the edge, helping to show a change of plane very clearly, despite the fact that light probably wouldn't hit this area. It's an interesting example of ignoring realistic lighting in favour of visual clarity. 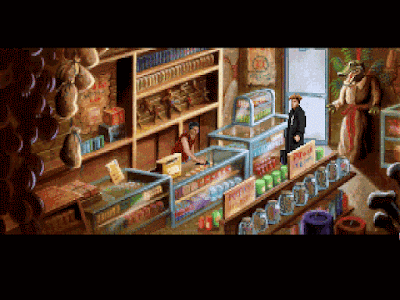 Another Gabriel Knight scene, this time with objects in the foreground, rather than the background, being lit on the edge. Here the left side shows various objects that have been lit this way, and as they move further and further out of the focal area of the scene (and 'away' from the light source shown by the glass door) the effect is less and less strong. This adds nice definition to the objects without  having to colour them in a way that would be distracting, and is a nice way to add some subtle purple colours into this part of the scene, without being as distracting as the purple candle in the bottom right. 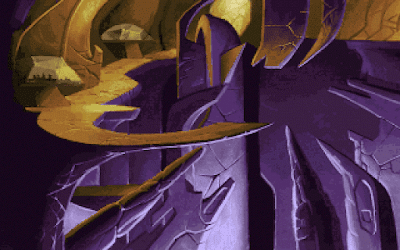 This scene from The Dig shows two equal and opposite light sources (in a nicely complementary palette) with rim lighting helping to show the directions each light comes from clearly. This makes for a very moody, atmospheric scene that's clearly divided into two parts. The strength of yellow features among the purple areas also really helps those particular forms to be very easy to understand, visually. 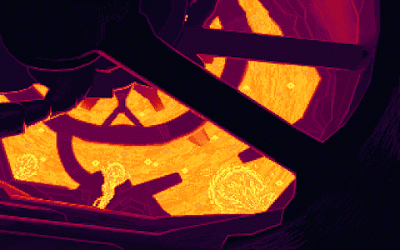 This Fate of Atlantis shot shows us looking directly down at a pool of lava, which gives a very warm, glowing feeling. By using pink and orange rather than pure yellow (which is what we'd usually expect from a yellow light source), we view the light from the lava to be more of a warm glow than a bright glare. Notice also that the rim lights get darker as they recede from the light source, another way to help show the distance. The diffusion of light here also acts in a similar way to atmospheric perspective, with the objects getting closer in value to the light source the closer they are to it.

A very strong example of the power of rim lighting is this scene from Monkey Island 2. The mass of complex, overlapping forms here would be a visual mess, save for the fact that their edges are very clearly defined by the blue and orange lights from the sky and lanterns. This not only makes for a beautifully moody night scene with a great atmosphere, but means that we can see where we can and can't go. This shows rim lighting as a great way to show planes, edges, curves and establish depths by very clearly indicating overlapping elements. 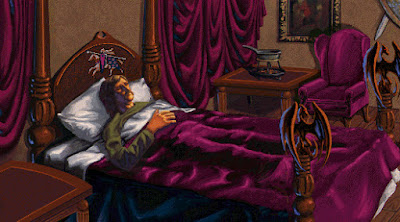 One last word, and something I sometimes see that I'm not too fond of, is where I see rim lighting where it's very hard to imagine a light source. Notice in this scene from Shannara the left bedpost, which sits right against the wall of the room. The blue rim light here is hard to accept - we can clearly see what lies on this side of the post, and it's a brown wall with no blue shade whatsoever. This makes the blue rim light feel quite fake and wrong. Notice how it feels less 'off' in the elements like the dragons at the foot of the bed - they're not great, but because there's no wall there, it's much easier to imagine a light source coming from this direction.

I love using rim lights - whether for adding definition, balancing colours, showing the strength of a light source or simply making a scene feel more atmospheric. They're a handy tool to instantly bring any object into a scene, and also for adding a bit of colour to a dark area in your background. As long as you're relatively careful to ensure the possibility of a light source in the direction you're suggesting one, they're very easy and a great tool.
Posted by Ben304 at 3:19 AM

Amazing work! Keep it up.

By the way - I think that fifth screen is from Discworld. :)

Anyway, thank you very much.
Have a nice day.

Hi Marek, thanks very much!

I can see how you'd think the fifth screen is from Discworld, the character's eyes in particular look more like Rincewind's here! It's definitely from Simon the Sorcerer 2, though, you can see it at the 2:03:35 mark here! https://www.youtube.com/watch?v=_3PQnmcD_G8

Thanks for keeping an eye on me, I admit I was pretty sure I might have got it wrong because I double checked the scene.

I hope I will see something new from you soon.

The left bedpost isn't a problem for me - I can easily accept that as an open window just out of the scene - just beyond that curtain - that we don't see. It's the dragons at the foot of the bed that stick out much more like sore thumbs, because of the intensity of the lighting on them, and because nothing else near them is receiving the same lighting. It looks like the entire side of the bed blanket is blue, rather than purple being touched by a blue light. The lighting in the scene overall is very weird... it's just really a bad scene in so many ways.

Really a very fine way to express and looking a very pleasant article with full of healthy information. I am definitely going to tell in my class about this platform and the information shared here. Very well written.หลอด led