Something I learned fairly early on from other adventure game art enthusiasts is that adding foreground objects to a scene is a nice way to spice things up. I think I first really noticed it in Day of the Tentacle, those wacky, cartoony shapes sitting in the foreground in pure black, and have used the idea many times myself.

These were especially cool because they took up some of the boring floor space, added decoration without being distracting and made it obvious where we could and couldn't walk. For quite a while I've drawn them this way because, well, everybody else did it, too. What really interests me now, though, is the different ways they've been used by different people, and what sorts of effects they can have. 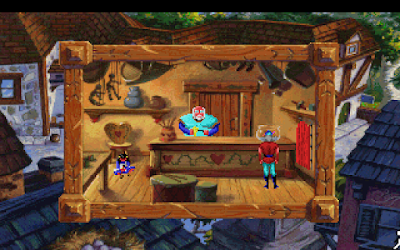 An interesting comparison to show the value of foreground objects is to compare King's Quest 5 and 6. Here in 5 we see an interior is shown as a picture in picture type effect - it's not very immersive, and feels like the town details distract a bit from the part they want us to look at. 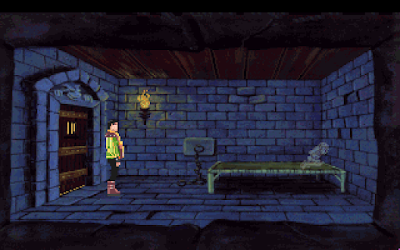 King's Quest 6, however, has the space taken up by the frame and exterior now taken up by foreground detail. In this case it's very simple - we're given the impression that a stone block is missing and that we're peeking through this to see into the room. These blocks that frame the shot are much less distracting than in the previous image, and it feels more immersive as a result - seeing a single scene at a time, rather than different parts overlaid another feels much more akin to actually being there. 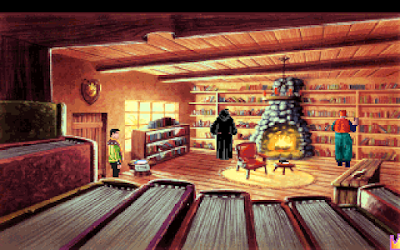 The game really plays around with this idea - from the fairly basic stonework framing in the last shot, we move to a rather evocative shot from within a bookshelf that adds a lot of texture without adding too many distracting specific details. The shot is somewhat awkward as a result of the books being rather out of perspective with the rest of the shot for the most part, but the radiating lines do feel like they draw the eye to the centre of the image. 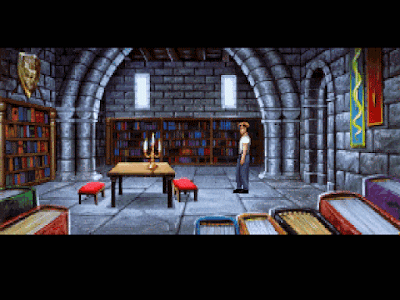 Here's a much more subtle and accurate version of the same idea - here the books are in perspective, and still nicely varied. You can see how nicely they hide large areas of fairly boring masonry and replace them with different colours and textures. Again, the lines of the books that appear to radiate from a central point in the image seem to help draw our eyes towards that central part. 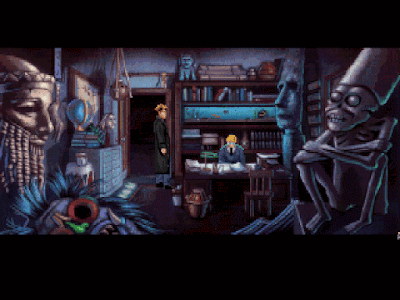 Gabriel Knight is full of many examples of interesting use of foreground objects. Something particularly interesting to me is the way many of them are facing the player, rather than towards the room itself. Here the various relics are clearly facing us, or in directions where we can very easily appreciate their designs, despite the fact that it'd make more sense to having them facing towards the desk and the doorway. This is an interesting example of style beating out realism, where this was deemed more effective by the artist at conveying the atmosphere they were going for. It really does add a lot to a scene that would otherwise be quite dull, and putting them so close to us as a viewer really does help show the grotesque details much better than having them as tiny, scaled objects on the shelf against the back wall. 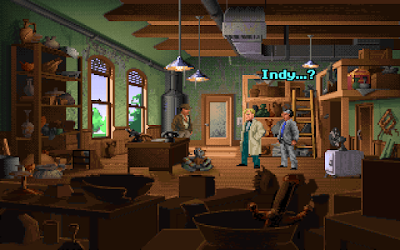 Another interesting example of relics as foreground objects is in Indiana Jones and the Fate of Atlantis. What particularly interests me about this is that the artists had to take into account the user interface when doing backgrounds, but in some cases, such as here, the interface is hidden. This leaves a large amount of space that has to be filled somehow - thankfully, the role of an archaeologist leaves plenty of room for placing the many recovered treasures of his expeditions. 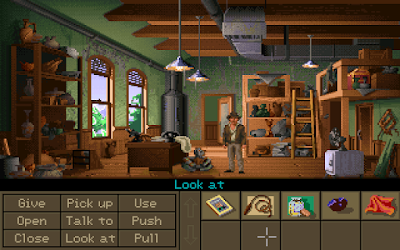 Once we switch into the game proper, the foreground objects are all hidden, with the user interface taking up this spot now. This is a really clever and interesting way to hide an otherwise omnipresent interface in a few specific locations without resorting to massive amounts of empty floor that would look quite odd. 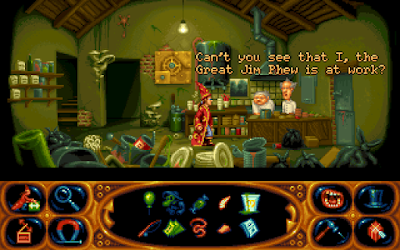 The use of an omnipresent interface doesn't negate the use of foreground objects, however, as can been seen from this shot in Simon the Sorcerer 2. Here the debris and waste of a messy kitchen clutter up the bottom part of the scene nicely, despite the fact that the interface takes up a similar amount of screen. This works particularly well in the Simon the Sorcerer games because Simon tends to walk in lines, rather than areas, so he very rarely moves towards and away from the camera unless on a specific path or through a specific exit. This means the foreground objects aren't really blocking any walkable area.

However, as can be seen in this scene from Sam & Max Hit the Road, blocking a walkable area off still works perfectly fine. It's quite obvious that we can walk past the Fiji mermaid in its tank to the right side of the room, but what this helps to do is to break up the wide, scrolling room into two separate compositions, left and right, which helps to eliminate some of the struggle that a wide scrolling scene can bring to balancing a composition, due to the shifting nature of the scene. It also establishes a nice zig-zag pattern in the floor space. This shape of foreground detail can be seen in several other locations in the game:

Notice again how the compositions are somewhat broken up by a central, more prominent object, that separates the two halves of the foreground areas nicely, and creates a zig-zag shape in the framing, and therefore walkable area. 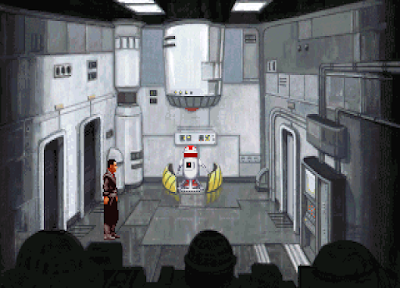 Compare this to the somewhat linear arrangement of the interesting shapes in this scene from Beneath a Steel Sky, which still has an object in the centre that creates nice negative space, but here without the wonky cartoon feeling that wouldn't fit a serious science fiction thriller so well. It still blocks the composition off nicely, but feels more sober and realistic than the zany angles of the Sam & Max scenes. 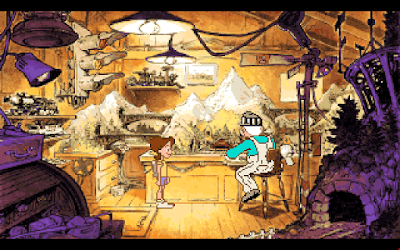 Another interesting example, this time from Willy Beamish shows the opposite - here the bottom centre is completely open, and the foreground detail mostly sits in the corners. What I particularly like about this is how the artist used a lovely purple to make the foreground detail stand out from the yellow scene - a great use of a complementary palette (see my earlier post about this for more examples). This really makes it a great framing device, and also adds a nice second hue to an otherwise very mono-coloured scene.

Here the colour difference isn't so obvious - instead, the artist has used rim lighting to make the foreground objects stand out. This doesn't present as clear a thumbnail as the previous shot, but it does feel somewhat more realistic, which suits the game better, and still reads quite well in game. The details here are also somewhat more abstract, suitable for the alien environment in which The Dig takes place. Here it's also very clear that the designers wanted us to walk in a very specific area, due to the fact that we're inside a vehicle, and the massive foreground detail makes it very clear that we can't walk in the bottom third of the image. 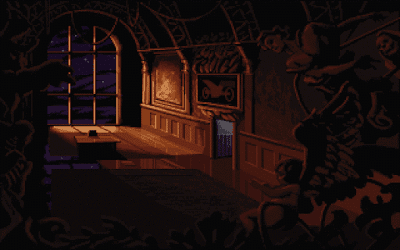 This scene from Full Throttle also uses rim lighting to define the objects, as well as a large contrast in values, but here we're given much more specific details. The wonderful swirling, curving forms presented by the group masses present in the foreground here add wonderful negative space to the large, flat wall that runs along the right two thirds of the image, and also help to reinforce the luxurious wealth of the building we're looking at.

Foreground objects, then, can be used in a variety of ways and forms to slightly different effect, beyond the simple, pleasant methods I first noticed being used in Day of the Tentacle. They're a great way to make scenes look better, and there's many, many examples of them being used in adventure games. A powerful tool in any background artist's toolkit!
Posted by Ben304 at 10:55 AM

I just wanted to say thanks for doing these write-ups.

This is kind of specific to adventure games, eh? With, like, comics, film or even other genres of game, you tend to want to be more sparse in detail so the viewer can focus on what's "important" in the scene.

Honestly, I don't really know enough about comics or films to comment on this in that regard.

As for other forms of games, my main feeling is that this works best for static or limited scrolling shots. Many games have shots that move around, which makes the framing and composition powers of this technique much less effective and predictable.

These static screens mean that an artist can usually judge - to some extent - where most of the elements on the screen will be, which means they arrange these foreground objects to work with them. Important to remember that I've really only worked on art in this genre of game, though, which means I can't really draw from any experience when discussing other genres! :)

Great stuff as always. Thanks for these!

Oh, and an interesting anecdote about the possible origin of these: Peter Chan was getting a little frustrated because, during the production of DOTT, he used to add a lot of objects to the environment which the designers made him take out because the players would want to interact with them and couldn't. So he took all these items and put them in the foreground as silhouettes so that he could still have them in.

That's of course not the orthodox explanation, but I thought it was fun. Either way, especially with parallax scrolling, it's an awesome way to add depth to a scene. Not quite the same thing, but Inside used a similar technique with big black shapes in the foreground which is quite stunning.

I honestly think it's very likely that Peter Chan was very aware of the need to keep this stuff out of the playable realm, to be honest - something I've been amazed at in studying his Full Throttle scenery is how he'll make odd choices in his compositions, specifically to allow for better playability.

Maybe it's something he learned between DotT and then, but in any case, it's certainly true that it helps him add details to a scene without cluttering up the playable stuff. Maybe Steve Purcell even trained him in this while they worked on Monkey Island 2 together! :)

There are countless games with different themes available to you today. In addition, you can also expand your game world with numerous other similar games like Play Find The Crypto Game Online.