The beauty of reflections in adventure game art 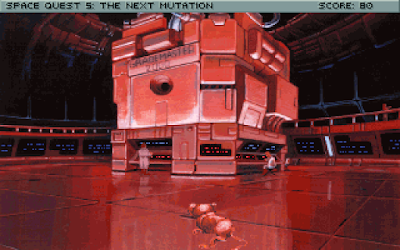 When I think about reflections in old games adventure games aren't really the first thing that come to my mind. Normally it'd be games where they're more prominent - the mirrors in Duke 3D, the cool reflection based puzzle in Another World, the hall of mirrors in the very bizarre Weird Dreams. Nevertheless, there are some interesting examples of them in adventures that are well worth checking out, from the subtle floor reflections seen in the Space Quest 5 shot above, to more interesting, dynamic examples.

Some of these examples are very subtle indeed. This scene from Sam & Max Hit the Road has the faintest of reflections on the ground, giving the impression of shiny linoleum. The counter also has a slight reflection on it - these are really just the faintest details, designed to give the impression of the glossy materials these surfaces are made of. 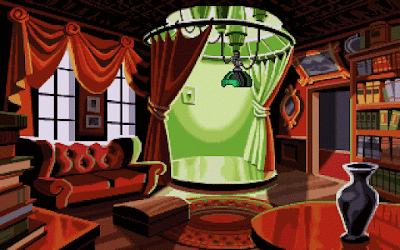 It's a little stronger in this scene from the game. The stronger reflections on the floor of the virtual reality device give the sense of a strong light source from above nicely. Notice how the curtains are perfectly reflected, but when the floor is reflecting the plain green wall the artist has added streaks, to help sell the idea of a shiny surface. This mimics specularity on a slightly uneven surface, giving the appearance of a reflective area despite no actual details for the surface to reflect.

This scene from Beneath a Steel Sky also has subtle reflections, but slightly stronger. The reflective floor is dirtier and grainier, this time, and while it feels futuristic, it also feels dirtier and less polished than the Space Quest 5 and Sam & Max examples because it. If you look carefully you can also see the suggestion of the seams between tiles interrupting the reflections slightly - particularly below the device closest to the left against the back wall. 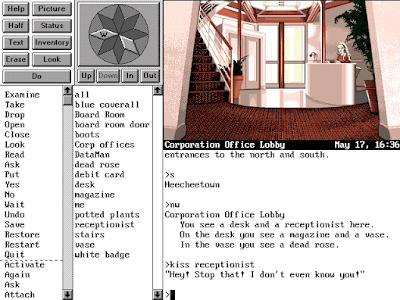 This scene from Gateway shows the opposite - perfectly uninterrupted reflections, giving a clean, corporate and futuristic feel. Notice how the light source blooms the reflections out slightly, putting whiter circles in where the light hits the floor directly. Also notice how the reflections being confined to a single part of the scene gives a really clear indication of the change in materials in flooring. One oddity is the potted plant, and how its reflection goes straight down rather than following the inverted shape of the plant. This is fairly common, and simplifies drawing a reflection, even if it's not very realistic. 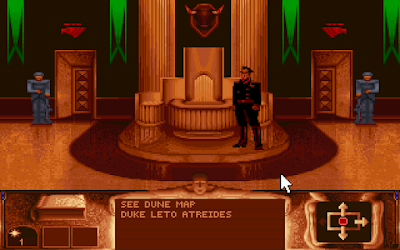 One last set of floor reflections is this from Dune - notice how under the two guards we can see the faintest suggestion of their reflections. This only really works because they're omnipresent parts of the scene - Leto doesn't have a reflection, because he's not always in this scene. If the guard reflections were stronger, the fact that Leto doesn't have a reflection might seem odd, but because they're so subtle, it doesn't really stand out too much. In modern games where memory and size constraints are much less of a consideration we merely give everybody a reflection. 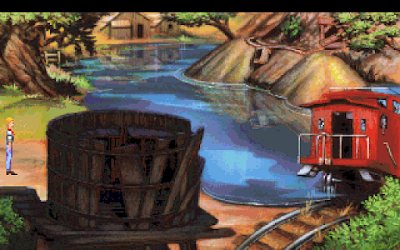 Another great use for reflections is to suggest the presence of water - in this scene from Freddy Pharkas: Frontier Pharmacist we see the reflection of the surrounding landscape, as well as the reflection of a blue sky in the water, which is easily read as being a large area of water. 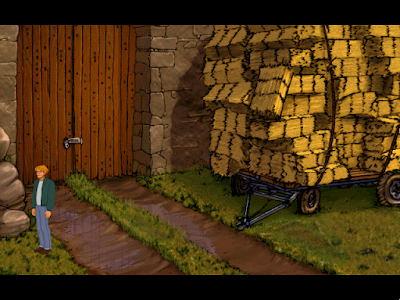 For a much smaller, shallower area of water, such as the puddles in this track in Broken Sword, a much milder reflection is appropriate. The barest suggestion of the texture of the door, coupled with the slight shift to a bluer hue gives the impression of a reflection, but because the water is so shallow, enough light still hits the ground beneath the water to let the ground still remain quite visible, and so a transparent reflection is appropriate here. 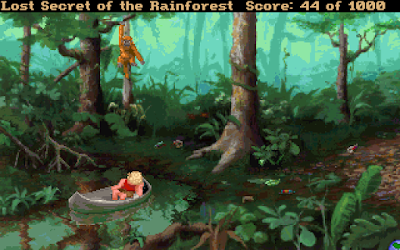 Reflecting a blue sky isn't always appropriate for water. This scene from Lost Secret of the Rainforest shows a much greener reflection - which suits the greener atmosphere we can see in the distance. Here a blue reflection would feel more out of place. The artist also added some nice distortion to the water here, to help give the idea of the uneven surface of water, as well as drawing in the reflection for the boat. Notice how the character in the boat isn't reflected. 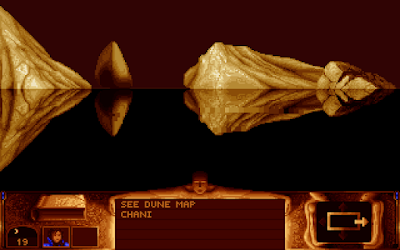 This scene from Dune shows an underground reservoir of water, and appropriately, no sky reflection is shown at all. The water is also perfectly still - there's just the mildest of distortions here and there, but otherwise it's a mirror reflection of the distant stone features. This shows how artists take into account the surrounding environment to inform the colour and movement of a reflective surface. 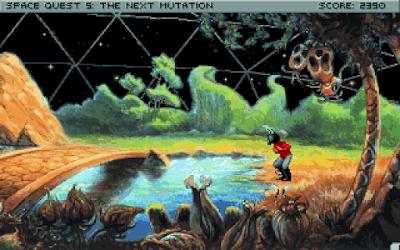 The opposite is visible in this shot from Space Quest 5. We recognize the water for what it is, because we're used to seeing water reflecting a blue sky like this, but considering the actual "sky" it exists under is the colourless black of space, the blue colour of the water here doesn't make any sense. It doesn't really ruin the scene, it just feels a bit less realistic than it perhaps should.

One reflection I particularly love is this shot from Future Wars. Here we see the side of a large building and a window cleaner at work - the massive, glass surface cleverly used to give a panoramic reflection of the scene behind us, interrupted only by the window washer's gear, the open window and the frames of the windows. One of my favourite things about this scene, other than the wonderful panorama it gives, is how you can see other reflections in the sides of some of the buildings in the reflection, a testament to Eric Chahi's imagination, attention to detail, and skill with the barest minimum of colours. It's a wonderful and extremely memorable way to start a game. 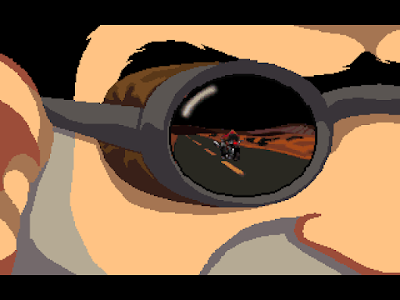 Another great example of seeing a bigger scene via a reflection is visible in this cutscene from Full Throttle, where we see Ben riding up to a rival gang member as reflected in the lens of his goggles. This is a very stylish and cool way to show this scene, and actually requires less animation than showing Ben from a long shot, riding up to the other rider. A really fun way to show two different angles at the same time. 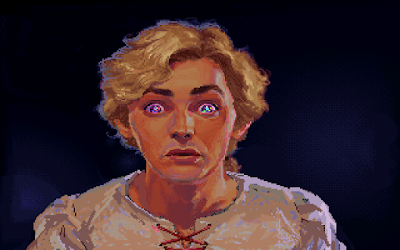 A similar idea is used in this moment from The Secret of Monkey Island, where Meathook opens the door of the "murderous winged devil" enclosure. Here we see the apprehension on Guybrush's face, and the gradual reveal of what is clearly just a parrot in his eyes, followed by his perplexed look as he realizes what the fabled beast actually is. This is one of my favourite jokes from the game - a wonderful way to deliver a punchline. 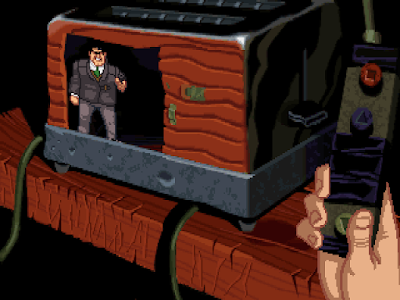 An even more complex shot, this later shot from Full Throttle shows the scene directly from Maureen's eyes, as she notices one of Ripburger's henchmen enter her doorway and point a gun at her, who she then deals with by lowering the ramp he's standing on. I love how this conveys the idea of how Maureen notices him at the same time as showing exactly what he's doing, and then showing how he deals with him. It's a great combination of ideas into a single shot, and tells multiple angles of the story at once. I also love the warped and distorted reflection in the surface of the toaster, which gives a great impression of being close to an object, where subtle imperfections in a surface will be more visible. 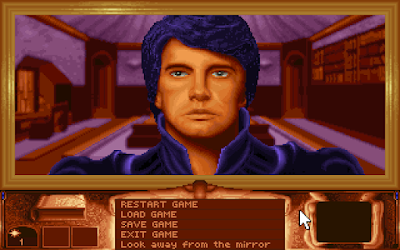 One final great use of reflections to tell a story is the mirror in Dune - Paul's journey involves seeing him change as he grows into his role as leader of the Fremen. This is beautifully illustrated by looking at yourself in the mirror - at first Paul's eyes are plain, indicative of his offworld heritage. As his exposure to the spice melange changes him, we see his eyes turn gradually blue when we return to the mirror to save our game. 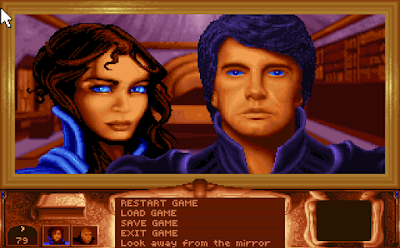 Here we see his eyes coloured deep blue, showing his adaption to the new world, and we also see his companion Chani next to him - I really like this idea of showing the two of them together in the mirror, showing Paul isn't just doing this for himself anymore. A wonderful way to show a character's progression. 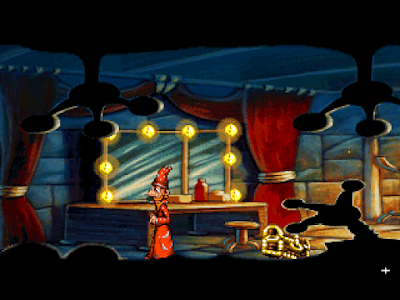 One final shot - just to show an exception. It's very common in games with mirrors to simply avoid showing reflections when it's not practical to do so. The mirrors in this shot from Discworld don't reflect a thing, no matter where Rincewind walks, and are just shown to have a glossy surface. This is fine, and perfectly readable as a mirror - it's really not essential to show reflections in order to give the idea of a mirror, it's just a nice touch.

I love seeing how artists have played around with reflections in these scenes. There's plenty of opportunities that playing around with reflections can provide, from simply making a surface look shiny and polished, to giving a whole new way to show a situation. They're a great tool, a fun effect to play with, and a nice way to spice up a scene - and though they may require a little extra code trickery in some cases to get working, well worth the extra effort.

Lovely post, thanks. The Future Wars example is a knockout all right! Regarding the puddles in the Broken Sword screenshot, am I right in saying the blue hue is a bit of a cheat? It reads as a reflective puddle, but only by giving the impression of a reflected sky which is not possible given the castle blocking it out...?

You're welcome! And yeah, the Broken Sword one really is a bit of a cheat, but once again plays to our expectations, and makes the puddle read more clearly than just a pure reflection probably would. In cases like this, I definitely favour readability over realism.

Nice post, as always. You've done your research. I had forgotten about a few of those games. Sadly, no mention of the working mirrors in a certain AGS Bake Sale game, but I can overlook that. ;-)

Also, I see you posted several screenshots from the old Dune game. Have you played the fan remake browser-based game, "Behind The Dune." Surprisingly accurate with a lovely art style. :=

Thanks Ponch! AGS games never get enough love anywhere, not even on AGS blogs, what is this?!

I hadn't heard of a remake of Dune, but now I'm curious! Seems like lots of stuff is getting remakes these days - I recently learned that there's an in browser remake of Hi-Res Adventure #6: The Dark Crystal with colourful graphics now! I will have to check out Behind the Dune some time! :D

I've become quite a fan of your blog! I love adventure games, and I enjoy seeing those graphics in a whole new context!

One thing I missed in this article are those instances where programmers obviously went to a lot of trouble to show dynamic reflections, even in old adventure games. I remember how impressed I was when I played Leisure Suit Larry 3 some years ago. There is a scene where you walk along a wall with gigantic mirrors, and everything you do is perfectly mirrored in it. And they did that in 1989!

I managed to find a screenshot: https://www.planete-aventure.net/shot/larry3-pc_03.jpg (as a joke, it even shows your dialog flipped.)