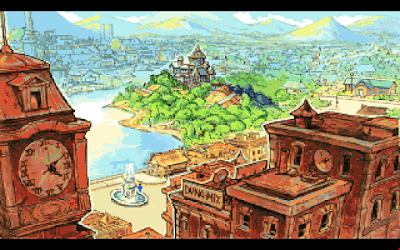 Atmospheric perspective, also known as aerial perspective, is a very old artistic technique where objects that are further away from the viewer are weaker in colour compared to those close to us. Usually the colour of the object shifts towards the colour of the sky - the idea being that dust and water in the air gets between us and the object we're looking at, and the more distance between us and the object, the more dust and water in the air to weaken these colours. It's very common to exaggerate this to direct focus, as can be seen in the Willy Beamish shot above, and it's interesting to see other examples of this in other games. 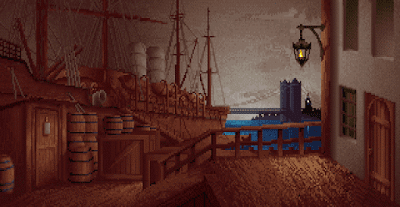 When atmospheric perspective isn't used, the effect can be a little jarring - in this scene from The Case of the Serrated Scalpel here we have deep blue water, despite a grey sky, which doesn't make any sense outside of the context of us expecting blue water because we're used to seeing it reflecting a blue sky. More relevant, though, the dark grey tower also feels like it's quite close, because it's darker than much closer objects, and it's somewhat hard to read the distance. The colours aren't representative of their environment. 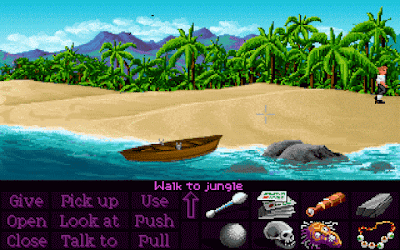 In this scene from The Secret of Monkey Island, we can see aerial perspective in play. The trees close to us are a vidid green, and then the tree covered mountains in the distance are much bluer, making it really feel like they're further away from us. It's still easy to see greenish hues on the mountains, but the closer and further greens are much easier to distinguish because of this effect. 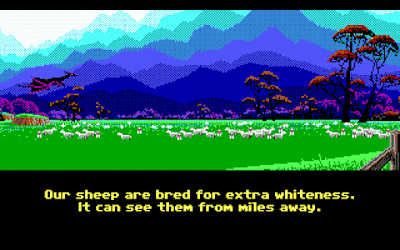 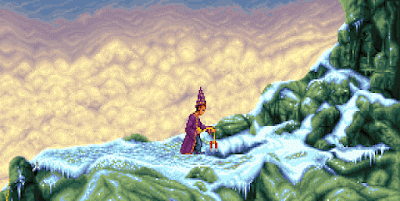 In this shot from Simon the Sorcerer the clouds recede from a creamy-yellow colour to a purplish grey and finally to a medium blue - almost the opposite to the blue to white we saw before. The effect works both ways, as long as we can tell what's a foreground image and what's a background image. Here the layers of distance also give a nice sense of physical perspective due to their arrangement, a nice use of these layers of atmospheric perspective. 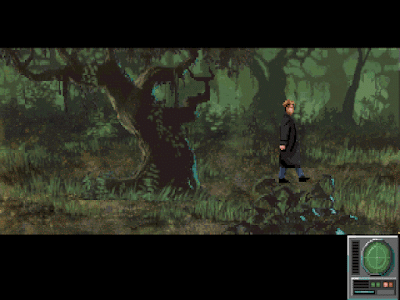 In this scene from Gabriel Knight, for another example, the trees recede from a dark green into a lighter green. There's not much of a hue shift this time, but the effect is still pretty clear - the colours change as they become more distant, from one shade to another, in a linear progression, and this helps to indicate distance. Here we get the impression of light coming through the trees. 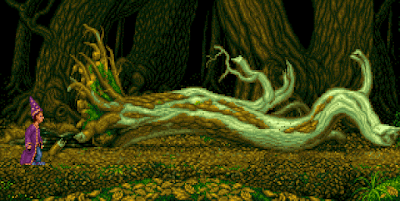 Again, we see the opposite effect here - we get the impression of trees receding into shadow from this shot in Simon the Sorcerer. Despite using totally opposite shifts in value, the effect is very similar. The main difference is that the dark distance in this shot supports bright nearer objects like this fallen tree, whereas in the previous one it supports darker objects closer to the viewer, like the dark tree and Gabriel himself. This particular example is less like atmospheric perspective and more like lessening levels of illumination as the thick forest blocks out more and more light going back, but the effect is very similar. 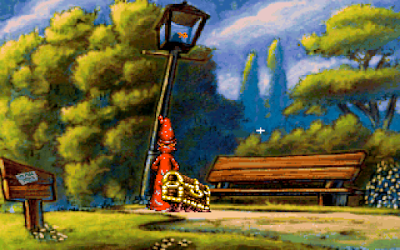 The light itself has a big effect on how these colour gradations should be picked. For example, in this shot from Discworld we see the distant trees going to a bluish green, a fairly light colour compared to the shadowy blues in the nearer trees next to it. There's still green highlights on the trees, showing the warm, yellow sunlight hitting the tree and making it look greenish. 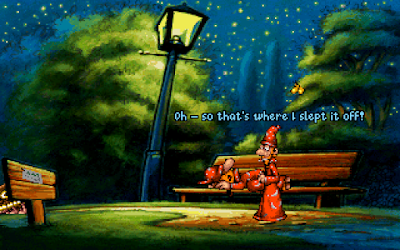 The same scene at night shows the distant trees without any green and all, and now a darker blue. Because there's no sunlight hitting the trees, making them green doesn't make much sense, so an ambient blue light is used to inform the highlights instead. The effect of distance is still quite readable, though, because these trees are once again closer to the sky's colour than the closer trees. 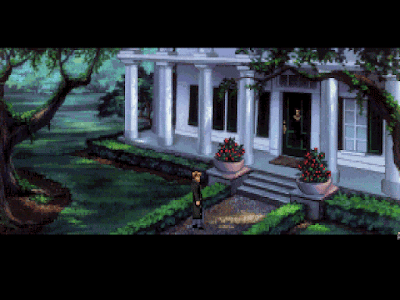 In this scene from Gabriel Knight we can't really see the sky, but the dappled sunlight of the scene suggests day time, which means it makes sense to make the top left hand corner recede to a light blue rather than a dark blue. In scenes such as this it's sensible to assume a shift to the colour of an imaginary sky, despite the high horizon line meaning that the sky isn't visible. 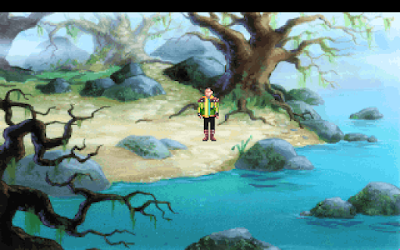 Weather conditions also play a big part - here the foggy air means that the trees and stones in the distance fade very quickly, which really helps to convey a thick, misty atmosphere. In this scene from King's Quest 6 you can directly see the moisture in the air, which really allows for a strong separation of foreground and background elements. A great way to convey depth and atmosphere, as well as direct focus. 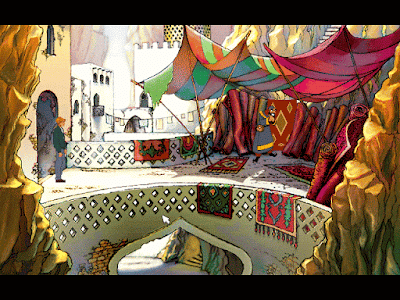 This scene from Broken Sword does something quite different and uses a very bright, strong sunlight to make the foreground elements have very strong highlights and shadows, and makes the distant objects feel quite washed out by the glare of bright light. A great comparison is the very richly coloured textiles in the foreground versus the much smaller, much paler textiles in the distance. Their much smaller size helps this to read clearly, but the fact that they're so much more washed out really makes the distance here read very well. This is an excellent way to bring the focus right towards the foreground and away from the background. 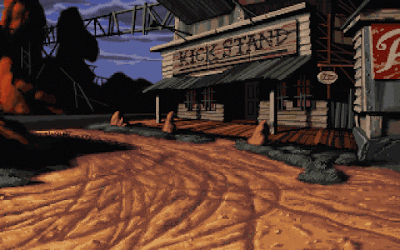 And one last example from Full Throttle, just to prove that there's no specific rule that works all the time. Here the foreground rocks are a rich, vibrant red colour, while the distant ones are pure black, despite the fact that they're receding to a blue sky. Here the lighting of the scene takes precedence, and we still read the forms as being distance because of the implied direction of the sunlight - we read the distant rocks as having shadow cast on them by the larger, closer foreground rocks. Here lighting trumps the trickery of atmospheric perspective, and we can read the distance perfectly clearly. Much like the whites of the background in the last scene, the darks of the background here make the lighter foreground colours read much more clearly, and bring the focus towards them.

Atmospheric perspective is a great way to show distance, and to direct focus. It's easy to get caught up thinking about one form of aerial perspective, but as can be seen from these examples, there's many ways to use the idea. It's a neat, versatile little trick, and a very useful one to have for when painting or drawing scenery like this.
Posted by Ben304 at 6:42 AM