The visual power of pure form

An exercise I've been doing for the last week, once per day, is to take a piece of background art from the classic LucasArts adventure game Full Throttle and to analyze it in some detail to try and figure out why it looks good. It's the game with my most favourite aesthetic, and the process of attempting to decode the visual language used in it has proven both very satisfactory, and very revelatory. I plan to compile them into a PDF once I've completed the exercise, and I'll post it here for your perusal.

For now, though, I want to focus on a single revelation it has provided me. In preparation for examining one of my favourite scenes, I took a quick look at the background before I started work for the day, just to give myself some time to think about it before I started trying to decipher it in further detail. What I noticed is that the silhouette of the structures in the image was incredibly complex and interesting, considering that what they represented was a fairly simple building, in terms of function. That brief study affected me so much that I spent the entire workday looking forward to tracing that silhouette in the evening, but even so, I wasn't prepared for how incredibly detailed and ornate the result would be. Here's what I ended up with: 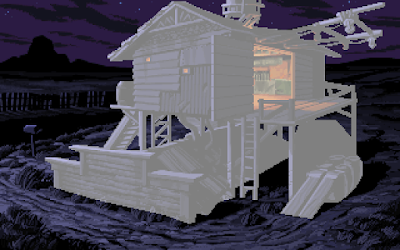 It's a wonderfully coherent, yet intensely intricate series of shapes that combine to present a unique and memorable silhouette. As I sat studying the result, a thought emerged: "I'd probably recognize the game and scene that this building was from just by looking at the pure, flat silhouette." The building is, in a word, memorable.

Small thoughts led to another small thought: What other scenes in other adventure games are like this? From this thought developed a hypothesis: It is possible that one of the biggest factors in making a scene or location memorable is the pure form of the shapes within it, and the uniqueness, boldness, and distinctiveness of the silhouette they present, regardless of how they're coloured, textured and lit.

A tough hypothesis to prove, but a simple enough one to examine. I'll look at some scenes from other old games in an attempt to begin exploring the idea. 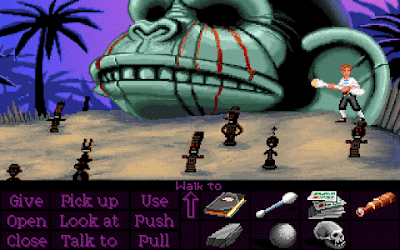 An easy starting point is the stone monkey head idol from The Secret of Monkey island. It's quite possible that much of the memorable nature of this scene lies in the expression, the rivulets of blood, and the fact that the colour scheme is very dark in an otherwise colourful section of the game. I think, though, that the main factor here is that we're presented with such a recognizable shape.

In terms of complexity, it doesn't compare to the previous scene, however it's probably even more striking because it represents something very easy for us to recognize. The fact that it's so easily identifiable, even without any details, makes this a much easier to remember structure than most of the other locations in the game. 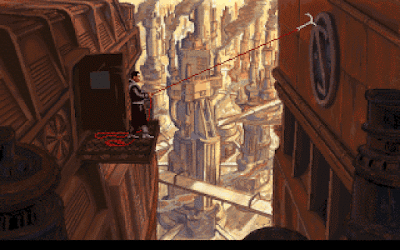 In terms of presenting a single, identifiable silhouette this is probably a step in the other direction. There's no one standout shape here to make the scene easy to call to mind, however the combination of the various structures in this scene is so unique - from the ledge we start the game on, and that imposing structure across the gap, to the twisted, smoking stacks in the distance - that it still feels representative of the power of pure forms.

I feel that some of the power of this scene may stem from the angle of the camera, too, but I'd also suggest that the angle of the camera is a method of dictating how the forms we're represented are translated to the viewer, making this a deciding aspect in the end appearance. If the angle from our Full Throttle scene had been changed to one point perspective, we'd be looking at a very different combination of shapes. 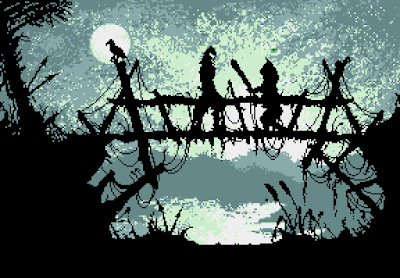 To step into a different genre entirely, here's a look at a screenshot from Blade Warrior. The intensity of detail in these pure silhouettes is breathtakingly powerful - trying to suggest this much detail while also having them lit and coloured would result it a much messier image, with many of the finer details being less noticeable. Because of the high contrast of the pure black over the bright sky, we are able to discern every intricate part of the form.

Because of this, the game is strikingly memorable in appearance. Our mind is very willing to jump in and fill the gaps that a lack of texture and colour leave, telling us very quickly what it is we're looking at. 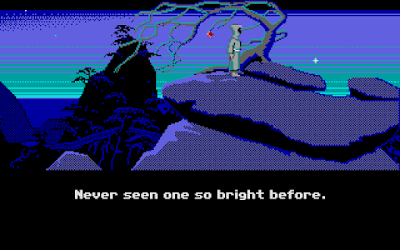 When it comes to iconic shapes, this tree from the beginning of Loom is a great example. This shape could be drawn in any colour, detailed with any texture and lit in any way and I'm quite positive people would recognize where it's from.

To me, this is one of the most powerful examples of the evocative power of a single, unique design - mention Loom to anybody, and it's a safe bet to suggest they'll think back to this scene and this tree.

Similarly, mention Another World (or Out of This World) to anybody who is familiar with it, and it's highly likely that their mind will think back to this scene. Though the forms aren't quite as distinct as in the previous example, they're still iconic enough to be instantly emblematic of the game.

This is a special case, too, because here we see an example in which the form of a creature is almost as memorable as the location. That shadowy beast, watching ominously from atop a rock, doesn't need any details to be an intimidating presence - its power and its menace are communicated wonderfully via a flat silhouette. The stance speaks volumes about the creature's nature, and its intent, and is another great example of a powerful, memorable shape. 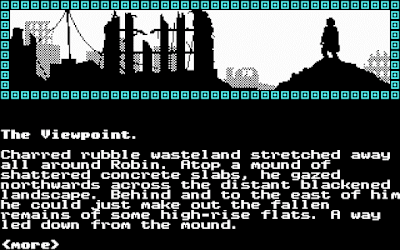 The incredibly simple image shown here in Mindfighter is another great example of effective silhouettes in both scenery and figure. We don't need any colours or textures to see that this is a ruined city, to feel the crumbling walls and ruined homes. A few quite simple, thoughtfully arranged shapes convey all the detail we need to form the full picture in our minds.

The figure atop his mound also conveys a story to us. His stance suggests his character, his frame of mind. We need little more than these few tiny pixels, arranged in this very specific way, to begin forming opinions on his character. Further detail is not really necessary. 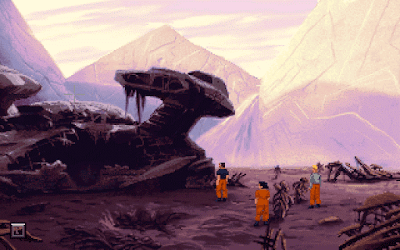 It should remain important to remember, though, that details don't discount the strength of a silhouette. This wrecked alien ship from The Dig may be rendered in much more detail, but that doesn't change the fact that it's the pure silhouette of the form that conveys the most interest. The texture and lighting here is mostly just slight enhancement.

What makes this scene truly memorable and recognizable are the unique forms, those elevated structures jutting up on columns above a fairly ordinary spaceship hull. They suggest advanced technology, bring to mind classic works of science fiction, and make us wonder about the sort of people that would construct such a vehicle, just by presenting us with a distinctive form. 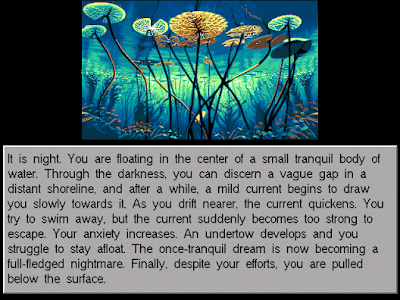 It's not just alien shapes that can be made evocative, though, as this shot from Gateway suggests. Here we see a very ordinary group of aquatic plants, but combined in a way that makes them interesting and memorable. Sometimes it's more about how ordinary structures are arranged and placed together that makes a silhouette recognizable and interesting, rather than the structures themselves being particularly unique.

Here, too, we see the angle of the camera playing a large part in how the shapes read, much like the earlier shot from Beneath a Steel Sky. Taken from above the surface, the forms we see here would be much more everyday, less unique, but taken from this angle, we have a wonderfully unforgettable set of forms.

A decent example of how unique form can stand out is this scene from King's Quest V - here we see many trees, but our eyes go instantly to that gnarled, twisted tree that's central to the scene. With this interesting, dynamic shape in the shot, the other trees become little more than window dressing - their absence would be felt, but their presence is hardly noticeable.

By juxtaposing fairly standard shapes with a very unique one, the artist leads our eye to where they want us to look. Some of this is also due to placement, framing, and lighting, but the strongest element here is still that odd, interesting silhouette. 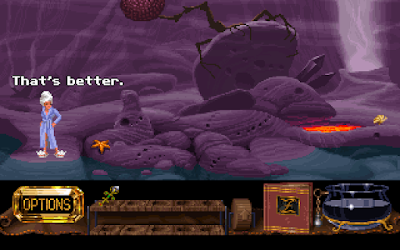 But even when it's not a central placement, interesting forms have their place. The great combination of rocks and odd plant here are great, and quite memorable, even with the most interesting part of the plant being cut off. We don't need to see it all to understand the form of the rest of it, there's just enough of the shape left in the shot that we can understand what makes it interesting.

Combining the various small structures of rocks in such an interesting, curving composition creates a superstructure greater than the sum of its parts, that catches and interests our eye. It's not necessarily the presence of a unique structure that does it, but the combination of smaller structures in an interesting way. 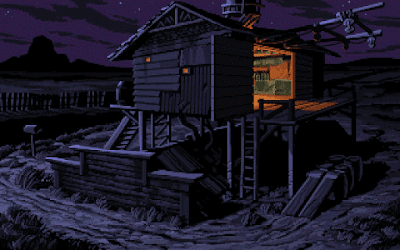 And that brings me back to our Full Throttle scene. There's no one shape in here that's particularly unique or distinctive, it's more the combination of various assorted structures into a single superstructure that - with the camera placed just so, and the elements arranged just like this - is bold, memorable and dynamic.

The colours and textures here certainly help to make the scene evocative and memorable, suggesting various small details such as a wall patched up with spare scrap and a hole in the roof where the light hits a water tank, but for me the real star of the show here is the form, the overall shape. And it makes sense, we're use to dealing with symbols and icons, simplified representations that convey important information to us. Recognizing things just from their shape alone is important to us in daily life.

I think there's a lot of power in these shapes. After thinking about this one building, I've been working harder to ensure the silhouettes present in my own artistic work are more interesting, more dynamic, and the results already have me confident that paying attention to these will improve my work. It's easy to focus heavily on lighting, on textures, on trying to balance colours, but we shouldn't lose sight of the foundation upon which all of these things sit: the pure forms we're working from. That's an incredibly important step, and one that will help take an image to the next level.
Posted by Ben304 at 1:16 PM

Glad to know you enjoyed it! Thanks for the comment. :)