When I'm not sure what colour scheme to paint a scene in one of the nicest palettes to try is a "complementary" palette. This is what artists use to describe a colour scheme where the two main hues are directly opposite each other on the colour wheel: 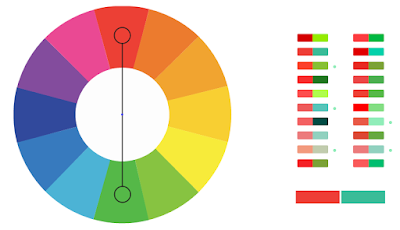 Red green is one of the palettes I enjoy playing around with when I want to show a dramatic, fantastical scene. Both red and green are quite eerie to use as bold highlights, but both can also be used to show more natural things. Nature has plenty of examples of colours in this configuration that catch our eye - think of red flowers on a green bush.

These exceptional levels of contrast afforded by using directly opposite hues can be very powerful, but it can also be more subtle as well. Not all of the scenes I'll be looking at here are pure red or pure green - some of the greens verge into bluish, some reds are purplish or orangeish. Mainly, I wanted to look at a wide range of examples, to see how different uses of this idea vary in atmosphere, power and contrast.

One of the first examples that sprang into my mind was this section in Kyrandia 2. Red and green aren't the only hues present here, but they work extremely well at highlighting two different features simultaneously. The deep reds and orange highlights of the stream of lava mixed with the vivid green of the crystal features really gives an impression of having stumbled upon some forgotten place. It's a great moment in Zanthia's journey through this magical world, and stands out quite distinctly from the more naturally coloured parts of the game that came before. 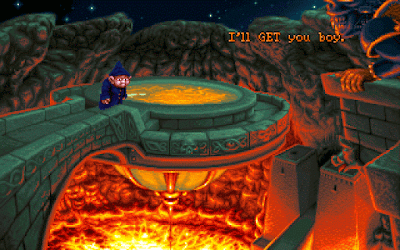 Here's an example of a similar situation with a very different approach. Instead of the deep reds of the lava we saw before, here they're a blazing, fiery orange, with scorching yellow and white highlights, and the greenish bridge over it is a much more muted, desaturated grey-green, which stands out perfectly, but not as a feature. In the last scene, our green bridge was the highlight, here it's the lava that's the star of the piece. 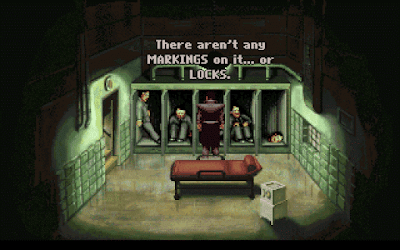 Desaturating both colours gives an oppressive, musty feeling like this shot from Beneath a Steel Sky. The red gurney looks uninviting, and the drab green surrounds feel cold and creepy. Everything here looks old and dirty. It's repulsive, even before we get to the figures in the lockers. 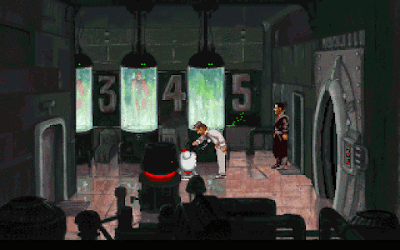 The same game uses red and green to indicate new things, too. Here both highlight colours glow, the reds with rich saturation and the greens with harsh white highlights. The reds of the floor and greens of the walls are much more muted, and jump out much less at us than the highlight colours. 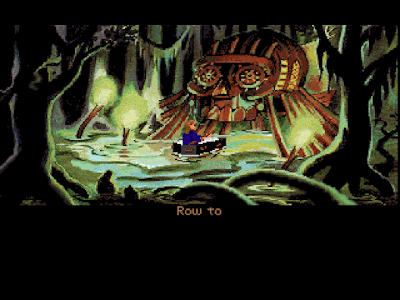 Similar glowing green highlights can be seen in this scene from Monkey Island 2, a powerful, harsh green that lights the trees and central structure in a very eerie way, helping to establish the feel of a mystic's dwelling. The reddish-brown building jumps out wonderfully from this green and grabs our attention, not only with hue, but being much deeper in value and saturation than the pale green. It's a great way of developing focus and leading the eye. A few small reddish brown features separate from the main structure in the form of torches on the left side of the image help to balance out the main focal point, too. 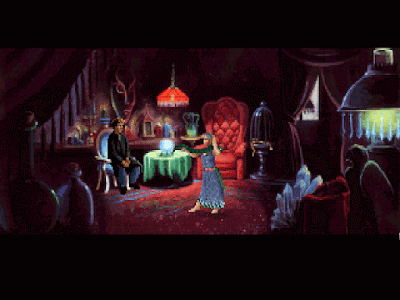 This scene from Gabriel Knight shows the roles reversed - here the red is the surrounding colour, feeling rich and aged, and also giving a great impression of somewhere dark and mystical. The green is the highlight feature, drawing our eyes to the crystal ball and firmly establishing what kind of area we're in. Similar to the torches in the last scene, a separate, less important green feature on the right side of the image helps to balance this strong green sitting in a sea of red. It's fascinating that two very similar locations can be given similar treatments with the colours completely reversed for quite similar effect. 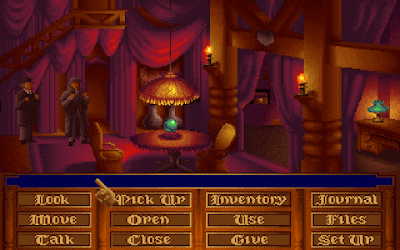 Yet another scene with a similar treatment in The Lost Files of Sherlock Holmes: The Case of the Serrated Scalpel. Here the table takes a back seat, and the crystal ball itself is given a direct green treatment that catches the eye instantly, again with a green lamp off to the right that helps to balance such a strong hue in a sea of opposite hues. The reds here are quite purple in the shadowy areas, giving a rich, luxurious feel. This combination of red and green is excellent for establishing the feeling of a mystic's abode. 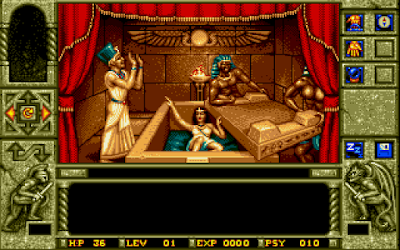 Another great example of a mysterious feel with just a few greenish highlights is this shot from Waxworks. Here the highlight colours are a rich teal, with greenish shadows that make them richer, and the reds vary between deep browns and oranges to pure red curtains that frame the shot. The use of the greenish blue highlights here really draw our attention to the points of interest. It's a great way of directing the player's eye to important elements very quickly, establishing a clear narrative in a very short space of time. 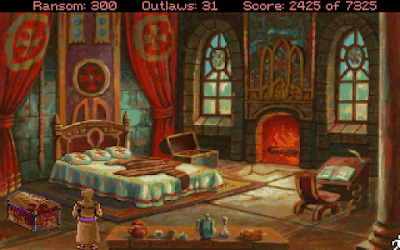 More greenish blues can be seen in this scene from Conquests of the Longbow - here the teal takes a back seat while the read becomes a rich highlight. Again we see red curtains, but here the teal is much less saturated next to the super-saturated reds. They help give the feeling of rich decoration, and the focus is mostly directed to the bed and the book with the use of value, rather than hue. It's a wonderfully rich scene. 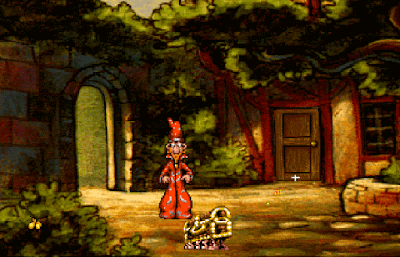 Finally, this shot from Discworld shows red and blue together in a much more natural setting. The greens here are much more yellow than in our previous two examples, giving the impression of a warm, sunny day. The reds, despite being incredibly saturated, are quite low in value, helping them not feel like too much of a feature, while still highlighting what would, otherwise, be a rather drab, brown door.

I love these colour combinations, and I love seeing how different artists use complementary red-green palettes in different ways, and how it affects their work. It's fascinating to make direct comparisons like this and realize that even with a very specific colour idea, the results can be incredibly different. Complementary palettes are wonderfully bold in their contrast, and this is just one example of the results that can be achieved by using two opposite hues to render a scene.

Interesting! I'll read up more on this.

There's definitely some cyan hues in the comparisons! :)

Not an old inaccurate color wheel. Just two different color wheels - subtractive vs additive colors (i.e. paints on a canvas vs pixels on a screen - or red/blue/yellow as primary colors vs red/green/blue).