I've examined two of the three examples of traditional 'complementary palettes' in adventure game scenery so far, so it's time to look at one of the most popular and useful combinations, that being blue and orange. This might be the most common example of using these traditional palettes, due to its versatility in night scenery, but there's plenty of applications that put interesting twists on the formula, and it's well worth studying them. 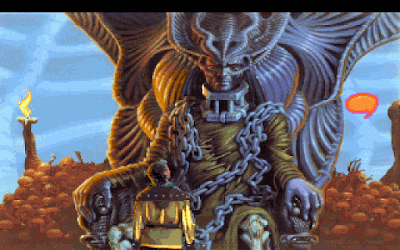 This example from King's Quest 6 shows how the cool blue of the main structure is warmed up by the firelight cast by the torch, with the pile of skulls behind the figure a grimy orange, all of which is framed by blue spines and ribs in the far distance. The blue of the figure and his chair is sickly and cold, reminiscent of death, most appropriately, and the warmth of that torchlight makes the scene feel more dramatic - though the blue of the backdrop could be the blue of a summer sky, torchlight wouldn't have the same radiance in such conditions. 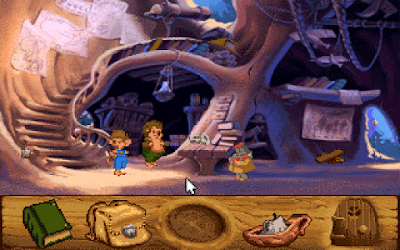 This scene from Once Upon a Forest shows a much less warm orange light - here it feels more natural, and sunny because of the less saturated hues, that make it feel like sunlight lighting up wooden material, rather than a direct orange light hitting a surface. The blues work well to give the impression of a cool, shadowed interior, and help the warmer sections to stand out nicely. 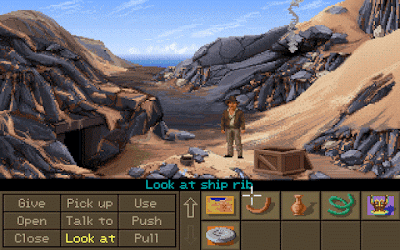 Another sunny scene, here from Indiana Jones and the Fate of Atlantis. Here the shadows go to black rather than blue, but the sky is a lovely, airy blue that helps to offset the darkness of the stone features. The sand also breaks up the dark rocks nicely, allowing those darker segments to act as nice framing and texturing devices among the lighter areas. 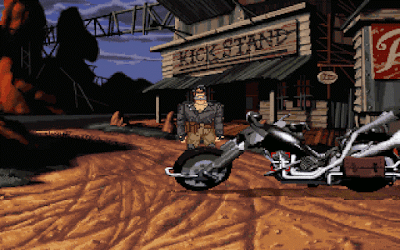 Again we see blue sky and orange ground, but this scene from Full Throttle feels less airy and more dusty. The orange dirt feels less like the sand of the previous scene, and more like the barren soil of an American desert. The sky is a gloomier shade, heavier and darker, and the stone features, where coloured, are a sun-baked reddish orange that feels hot and dry. 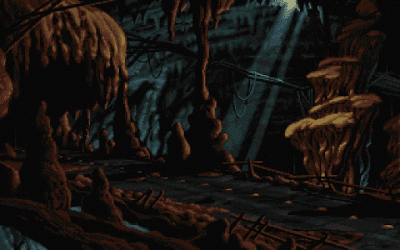 Moving to an interior from Full Throttle, we see a cavern given a dank, gloomy feel by means of those dark blues in the distance, bringing to mind the cool shade of a cave. The orange-brown foreground features stand out nicely, making the scene clear to read, and reinforcing the red, desert rock of the area (as opposed to the grey stones we saw earlier) without being too warm so as to feel brightly lit. A very clear division in hues like this makes the scene very easy to read.

Another example of a cave with blue in the distance and orange in the foreground is this scene from The Dig. The rich ultramarine of the distance feels mysterious and otherworldly, and the warm orange of the foreground feels dangerous and eerie - the hidden lightsource coming from directly below is from the opposite direction we expect sunlight, making it feel somewhat 'off'. Interestingly, Maggie's orange suit means she blends in with the foreground hues, meaning the dark values behind her, and the fact that she animates while in this web, are needed to make her stand out clearly. 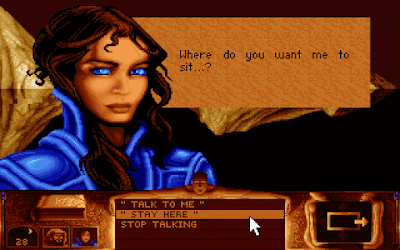 Dune's sietches, on the other hand, are almost wholly orange, with no blue distant light to add a sense of depth - however, unlike Maggie's orange suit, you can see here how the blue eyes of the Fremen stand out, and catch our attention. This example is particularly powerful because of the blue stillsuit - though many Fremen have brown or green stillsuits, the blue eyes are a constant, that jump out wonderfully against all the warm colours. 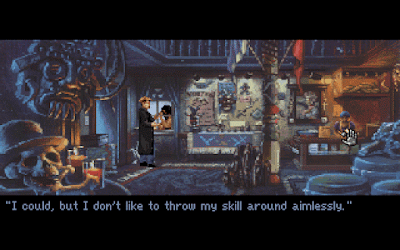 From mostly warm hues, to mostly cool - here the shadowy, mysterious blue of the voodoo museum is broken up in just a couple of places by the warm glow of lighting. This is particularly effective in the foreground, where the skull and mask are made that much more eerie by the warm lights hitting them from the side and below. 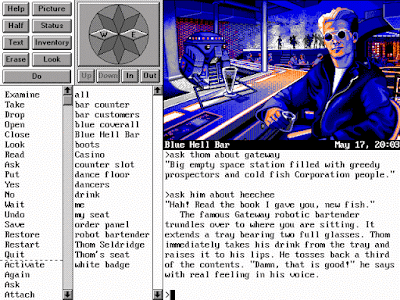 Another great use of orange highlighting in a blue environment is this scene from Gateway, in which the orange face and hands of the figure really pop against the deep blue backdrop. The high levels of saturation in both colours really give this a neon drenched, science fiction feeling, particularly the way the skin of the face is shaded to a very unusual colour for skin. 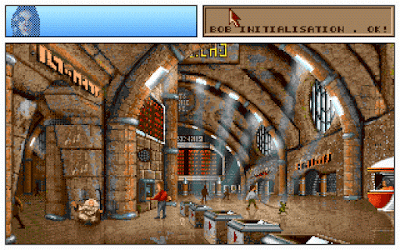 This similarly futuristic scene from The Koshan Conspiracy is much earthier in tone, but the slight blue tint to the lights helps to make them look more unique than the white or warm lights we're used to seeing in an interior. The use of blue here is very minimal, but the rays of light travelling down are just blue enough to make them really feel bright against the orange tones of the backdrop.

This scene from The Secret of Monkey Island shows the opposite - very deep, saturated blues contrasted with warm yellow-orange lighting. This warm lighting is reminiscent of lamp and candle light, much more suitable for a game set in the era of pirates that the blue lights of the previous two scenes, and it really breaks up the deep blues nicely. The blue feels quite naturally nocturnal, despite being much more saturated and bright than a real world night scene would be. 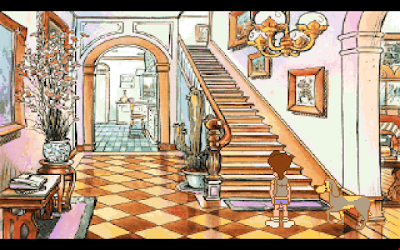 If the oranges are kept quite saturated, but the blues are stripped of saturation, we get a much lighter feel, such as in this shot from Willy Beamish. The pale blues help detail the kitchen through the archway nicely, and also help it feel far from us, as well as breaking up the oranges nicely throughout the rest of the scene. 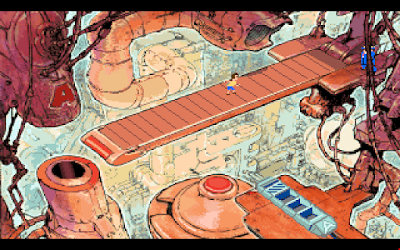 This example has the orange very saturated, and almost red in places, and the blue warm enough to be teal in spots - it's almost reaching the red and teal combination of the scene from Conquests of the Longbow I looked at two posts ago. This shows the great contrast setting deep oranges and reds above pale blues gives, with wonderful readability in the forms as a result. A really interesting use of the colours.

And with that, my examination of traditional complementary palettes in adventure game scenery is complete. There's plenty of other examples, of course, but I've tried to find a wide variety of uses that show many different effects artists have managed to achieve by using these palettes. It's a fascinating and educational subject, and I hope you enjoyed studying these scenes!
Posted by Ben304 at 5:57 AM