The traditional way of drawing adventure game graphics - certainly in the 'point and click' era - is a fairly eye level approach. Earlier parser games often had a slightly higher camera angle to facilitate the '3-D' worlds which allowed players to walk off the screen to the north, south, east and west. Some games of the point & click style retained elements of this, but most of them are closer to the angle showed in Simon the Sorcerer 2 above. It's a handy way to handle animations, show the world, and the eye level approach is pretty immersive. All in all, it's a practical, useful angle to work with.

Sometimes, though, it doesn't quite convey what an artist wants, and so they'll shift the camera angle up or down to give different aesthetics to a scene. I'm going to split my examination of this effect into two different posts, one for low angles and one for high angles, because the number of examples would, otherwise, become somewhat overwhelming. I'll start with mild examples and proceed to more extreme ones through the post.

A very mild example of a low camera angle, this shot from Sam & Max Hit the Road places us on top of a tall structure. Keeping the camera angle somewhat low (notice how we see the underside of floors, rather than the actual floors themselves) helps to give the illusion that we're up high. This is something low and high camera angles are particularly good at - indicating danger or uncertainty, by giving a sense of scale or height beyond the standard. 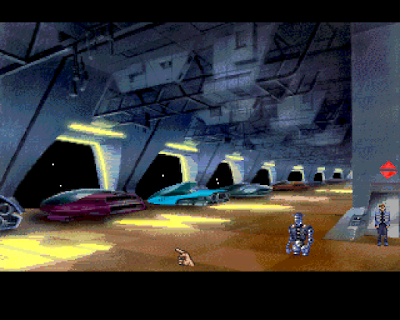 They can also simply use that sense of scale to make a scene feel more impressive through sheer size, such as in this shot from Universe. The massive amounts of ceiling shown give a sense of huge scale, aided by how far back the scene recedes. There's still plenty of floor visible, but by giving such a sharp sense of perspective, we can really appreciate the height to which the ceiling extends.

This sort of shot from The Dig, showing the ceiling and the floor to such extents, can really show the power of what feels like slightly warped perspective. Because we can take in so much of both planes, it feels like the camera is zoomed far back, with that massive ceiling looming above showing how this sort of angle can feel huge and intimidating. 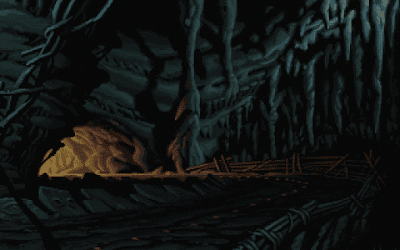 Here's an interesting example from Full Throttle, where the road is the main element we're interested in, in terms of playability, but the cave itself is the most interesting part of the scene. Making so much of the scene taken up by the cave wall and ceiling really makes for a much stronger scene than focusing on the road, as older games often did. Interestingly, this camera angle feels slightly higher than the previous scene, despite arguably showing less "floor", because the camera feels closer to the action and the ceiling isn't immediately apparent. 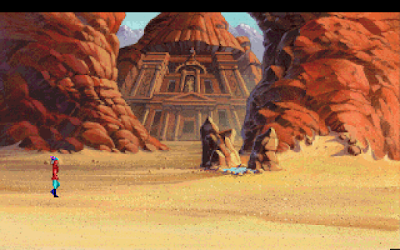 Here's a great example where the artist used quite extreme distortion of perspective to give the impression of a low camera. There's a massive amount of ground - about half of the scene, allowing for a lot of walking around, but as the shot recedes the lines converge more and more, like a fisheye lens. This allows the structure in the distance to loom nicely, a strong, foreboding form made more powerful by this distortion that gives the illusion of a rather low camera. 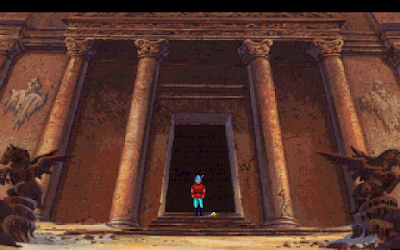 A closer look at the same structure shows a more pure take on perspective, this time with a genuinely low camera angle with the minimum of ground shown. The structure looms impressively, with Graham appearing tiny relative to that massive doorway, and the stone pillars towering above him. This is a great way to make an otherwise quite plain scene visually striking.

Again with the camera pulled back, and the perspective distorted, is this scene from Simon the Sorcerer 2. The castle looms imperiously, reinforced by the circle of sky being completely hemmed in by the surrounding rock mass, making the impression of 'looking up' even more believable. This kind of technique is great for establishing shots like this, as they don't have to worry about being playable, freeing the artist up to play with elements such as this to their heart's content. Particularly nice in a subtle way here is the structure off to the left, which helps to reinforce the strong perspective by showing another plane not very visible from the main structure.

This great shot from Curse of Enchantia once more uses a wonderfully warped perspective to help the scene feel tall and oppressive. This sort of technique works particularly well when dealing with a magical place, such as this, as the unreliable sense of perspective really helps the place feel unnatural and gives a sense of uneasiness. Coupled with the looming architecture, the effect is quite powerful. 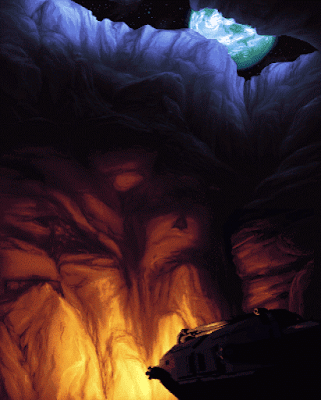 This sort of shot is also great for showing a descent - this scene from The Dig starts from the top and moves downwards, giving us the illusion of watching the characters descend from a fixed camera at the bottom of the chasm. This feels more dynamic and interesting than a straight descent, helping to increase tension by suggesting a great height that they have to descend from. 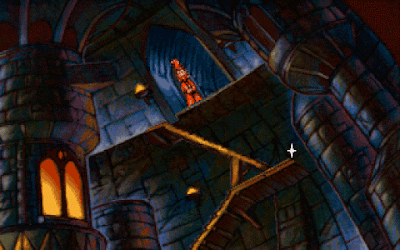 Another great example of such a descent is this shot from Discworld. The super low camera, mixed with an unusual angle that almost gives a sense of vertigo, makes the scene seem perilous and unsteady, as well as enhancing the magical and unpredictable nature of the Unseen University this shot is taken from. It's also the second playable scene in the game, making for a great introduction to the setting. 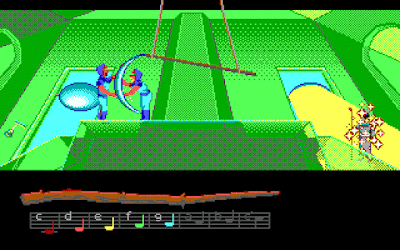 This type of shot always works powerfully for an ascent, as well as a descent. This scene from Loom sees us looking up from having ascended to this height, and does another great job of conveying the sense of height. Whether used to show an ascent, or descent, this low angle conveys height/depth wonderfully. The effect is almost dizzying in this particular shot.

A really good example, once more of a descent, this shot from Monkey Island 2 shows us almost directly beneath a boat, looking up as Guybrush dives into the water. This scene helps to convey the depth of the water beautifully, and after his descent ends in a shot from a high camera angle to sell the depth even more. Lucasarts games employed this effect numerous times in games like The Dig and Full Throttle, and it's well worth seeing in motion to really see how the effect works.

It's inspiring to see how many artists have used this technique in their work to give this sense of scale, foreboding and visual impact to their scenery. Being able to convey great size or distance without relying on making the player character smaller is wonderfully empowering, and I love seeing this in play. I also love to see just how far some artists push it in their works, and what they can achieve with such strong approaches. Although games often call for practical, eye level compositions, breaking this tradition periodically works great, and is a handy technique to be aware of when planning out scenery for your projects!
Posted by Ben304 at 3:17 AM

Always a fan! -- I wanted to give you a link to my collection of aspect-corrected, 4:3 adventure screenshots: http://adventurerooms.imgur.com/

This is an amazing resource! Thank you very much for sharing! :D