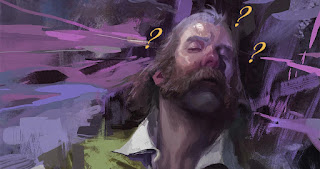 For the first time in my games career I've found myself with the prospect of trying to learn how to draw line art. I've drawn plenty of lines in pixel form before, but never in a very construction focused way, and never with any degree of focus or intent. There's always a lot to think about with any new idea, and I've been making something of an effort to learn as much as I can about drawing with lines. There are plenty of very good examples. But it wouldn't be one of my posts without massively overthinking something quite fundamental, and so I find myself beginning by asking the question "What even is a line?"
Of course we all know what a line is, small children can successfully draw a line. So let's further clarify, here: "What tells me where and how to draw a line?" And more specifically, when we're drawing a human figure, in the particular style I'm trying to emulate for this game. We won't need to worry about patterns, textures or cross hatching at the moment.
The very fine Ivan Ulyanov and I were discussing this the other day, and he mentioned that Leonardo da Vinci said that lines do not exist. This makes sense to me - if I was an annoyingly smart trickster that liked to mess with people, that's the sort of thing I'd say too. I'd probably write it down in my cool mirror writing, too. Using lines. That I'd argue weren't lines, but masses of negligible volume.
These are the sort of things Ivan and I like to talk about. But what Leo means here, I think, is that when we draw a person, the line is just an abstract representation of a surface. When we draw an arm by drawing two lines from the elbow to the wrist, we're not saying that an arm is two incredibly thin lines, with a gap in between, we're using those lines to show the edges of that arm. 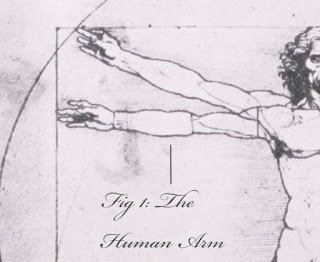 As George Bridgeman says in Constructive Anatomy: "The line, in actual construction, must come first; but as mental construction must precede physical, so the concept of mass must come first, that of plane second, that of line last." Maybe it's common to say "As mental construction" when you're Canadian. More simply put, "Think about the volumes first, then their surfaces, and define them with lines" serves pretty well to sum up his suggestion here for our purposes at the moment.
Back to our arm, that we've drawn with two thin lines, which we have defined as showing the edges of the arm. But of course, our arms don't have edges. They're not a flat piece of paper, they're a sort of tube structure. So what are the lines actually representing? A neat way of defining it could be "The point at which the surface of a volume begins to turn away from the eye". I quite like this to start with, because we're dealing with very complex masses in the human figure, and the lines are just showing us "Here is the point where the surface begins to be obscured." 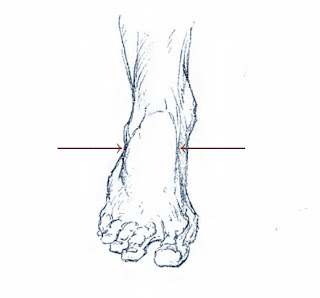 Consider this drawing of a foot by our friend from before, Mr. George Bridgeman. What are the two arrows pointing at? Certainly they're not just the "edges" of the foot, there's more foot beyond these lines as we can see. But if we think about this area as the surface of a volume, what we see here is George trying to show us where this surface is starting to turn away from us. If the foot was directly lit from the front, these parts of the foot would be in partial shadow, because they're turning away from the light.
Why is all of this important? Because sometimes I am going to have to represent overlapping volumes, using lines, and I am not very good at that yet. But in these ideas lays the secret to getting good at that. 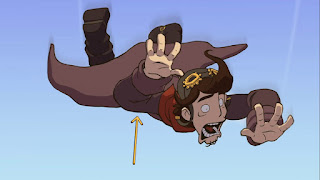 Consider the arm indicated here in this shot from Deponia. This is an effectively convincing simplification of a series of complex, 3D forms, at a very awkward angle to draw. If we look at the base of the palm of his hand, the centre of the cuffs of his sleeves, we can see where the artist has tried to represent the surface of these volumes turning away from the eye, and where the masses overlap. Pretty cool stuff. Cooler than me, anyway. 😎 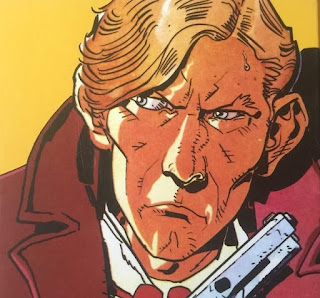 Another great example is this face by everybody's favourite French line wizard super uncle Moebius. Look at the lines on the cheekbones, and how they indicate the points at which the volume of the cheek turns away from the eye and overlaps the jaw. If you look around the eyes and brow you can see all manner of wrinkles suggested by his fabulous European lines. And what is a wrinkle? Why, it's a place where the surface of a volume changes direction and make a crease into itself. Fantastique! Our theory holds up!
And as for the seams in clothing, the curves in the hair suggesting a series of follicles, and the little lines here that don't actually suggest a simple, important change in direction away from the eyes? Well, good question! I'm still trying to solve this issue, hence why I'm thinking about lines so much. Perhaps we can add to our definition that lines denote a noticeable change in topography. Perhaps there are considerations of textural density to take into account.
The most important thing for me so far is that the overlap of lines can show which masses are in front, and how they connect, and that lines represent the surface of a mass. Within these two ideas, at least, lies a good portion of the solution to the problem of representing something as complex as a human in something as simple as a series of lines.
I'm still working on all this, and I am still trying to hone my judgement for where to use lines and where to break them. With enough practice, study, and a comedic volume of overthinking, I know we can unlock more guidelines by which to measure our work, and use these to fix or purposefully break our style for effect. This is definitely enough overthinking for me, now, though, and probably enough for you too. I'd love to hear any further wisdom on this topic!
Posted by Ben304 at 5:13 AM