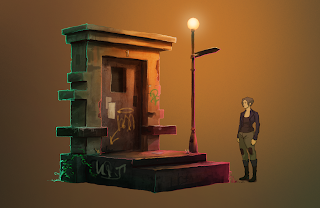 The beginning stages of any project are an interesting time for an artist, and in my experience usually involve a range of different things. Learning new software or skills, gathering reference material, doing little tests to prepare for what's to come, and reading through the documents to try and get an idea of the setting and characters - all important stuff, and slightly different each time.

Old Skies has had a few false starts for Dave and I. It began as an experiment in learning to work with 3D. Eventually we agreed that we weren't satisfied with our efforts, and decided to go back to 2D. This time, though, I wanted to try for a higher resolution and characters drawn with line art rather than pixels. I have never drawn characters in this style, but it's been in my mind for years to try. I felt that I was ready to learn something new.

I studied the work of comic book illustrators, trying to get a feel for the style and what sort of direction I wanted to go in. I went back to my anatomy books, in a fleeting but good-natured attempt at solidifying my knowledge there, and I learned a new piece of software called Krita. It's hard to find higher res animation software that I get along with. So far this is the best.

Then I jumped into the project, doing a test background and a couple of test characters. They looked good, and people liked them. My confidence was bolstered, and I jumped into production. Though it started well, I found myself regularly hindered by my workflows, both for environments and characters. The methods that I have relied on for years didn't work particularly well, and I found each scene a battle to finish. The character designs just didn't feel right. Most of them were okay, but they were missing something that I didn't have the visual vocabulary to define or fix.

Seeing everything in game, I was disheartened at how the characters looked moving around on screen. It just didn't feel right to me, and I figured a fair bit of tweaking and fixing was in order. Needless to say, after a call with Dave in which he mentioned that he wasn't happy with his script and wanted me to get back to work on Nighthawks while he sorted things out, I saw an opportunity to reflect and try to establish what went wrong.

Months later, and it's time to try again, and this time I think I have it. When Dave came back to me with a redesigned script, and told me that he was cutting all the characters that I had done animations for, I took this as my chance to start with a clean slate. Unburdened by the dead weight of that old work, I decided then to redo everything, even the locations that would be re-used, and I decided that I would take the month of June to study, experiment, and trial ideas.

My goal was to develop a workflow that could reliably produce consistent results in a style that felt cohesive and was manageable for a full game. I wanted to build a vertical slice this time, with characters walking around in a way that felt and looked right this time. I wanted to break painting backgrounds and drawing characters sprites down into a series of efficient, repeatable steps, something I was sorely lacking the first time around. I wanted to try different approaches to animation and see what worked, what looked bad, what took too long.

And now it's July, and I've had my month of study. I've painted scenery that got both Dave and I excited. I have characters walking around in a way that looks and feels so much better than before. I've tried characters with visual effects, built intricate background animations, and animated background characters that don't steal the player's attention. I've done subtle, careful animations with an excessive amount of frames and carefully drawn expressions, and I've done fun, snappy animations with smear frames and a careful approach to timing.

Most importantly, I have found a way to make something that fits both my vision and Dave's vision for this game. That unity of vision, for me, is the most important thing, and it's what we had been missing until now.

This will be my third attempt at making Old Skies. I haven't written on this blog for years, because I was very busy either trying to incorporate the things I'd written about here into my work, or learning things that I'm too inexperienced with to make them worth writing about. But I'm back in learning mode again, and there is much that I want to study. I hope you'll join me!

I didn't realize that work on Old Skies had stalled. Now that you're starting over, it would be interesting to see some samples of the work you found unsatisfactory, and hear your thoughts on what it lacked. From what you shared before, it looked pretty good to me! (Maybe put a watermark on it to ensure it isn't used as an example of what the game looks like once it's released.)

I think we didn't talk about it much because it's more interesting to talk about these things once you've solved them, rather than when you're trying to solve them. For me, at least, anyway.

And yes, I plan to! Although one of the bigger issues was not so much the visual style - there are still some scenes I'm very proud of from that attempt, but that the workflow wasn't reliable. Sometimes it worked, sometimes it didn't. Worse, it wasn't always clear to me why it was working when it did work, and why it wasn't when things were wrong. That's the most frustrating part when you've got a big todo list, and the fact that I painted 18 backgrounds (20 if we count variants) and still couldn't consider that workflow reliable suggests, to me, a core problem exists.

I've often tried to make sure my process is absolutely sound before I commit to a style, but usually by that stage in a project it's too late to start again. I consider this a rare opportunity!

Once I have a bit more clarity on the issues I will be sure to show comparisons and try to explain the ways in which I've adjusted things, and why!

A bit late, but excited to see the blog back! Good luck! :)

Never too late, thanks for the support! :D