Windows as a visual tool 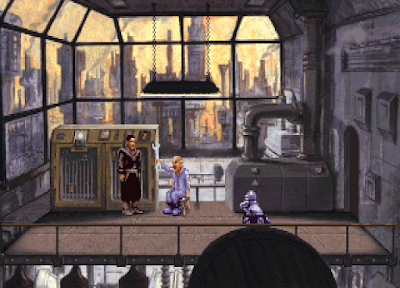 Having looked at reflective windows last week, it's a fine time to look at windows that let light pass through, too. One of the most interesting design tools, windows can provide interesting shapes, introduce new colours, act as a source of light, and show us the world waiting to be explored, beckoning us to adventure and saying 'Where do you want to go today?' As the above scene from Beneath a Steel Sky shows, they're a great way to add a whole new layer of visual interest to any location, and their benefits and uses are many. 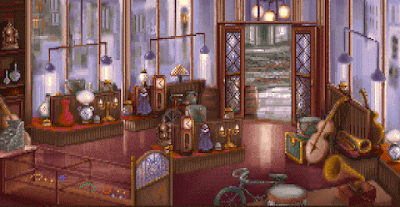 This scene from The Lost Files of Sherlock Holmes shows a similar idea, with the large expanse of windows breaking down the barrier between the store's interior and the street outside, letting in light and a feeling of life outside. Particularly nice is how these windows, unlike the previous ones, affect the colour of the world outside, allowing us to see the glass's presence, and making a clear divide between the visual layers. This also helps us see more clearly where the doorway is, which is always an essential consideration. 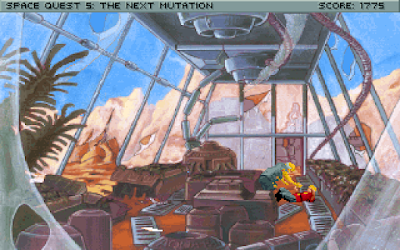 A more extreme version of a similar layout, this example from Space Quest 5 shows, once again, walls being replaced with windows, showing the outside world wonderfully, and providing excellent amounts of light. It makes for a very open, panoramic scene, and it's still very easy to distinguish the boundary between interior and exterior because of the window frames. These are a great way to provide structure and perspective to windows. 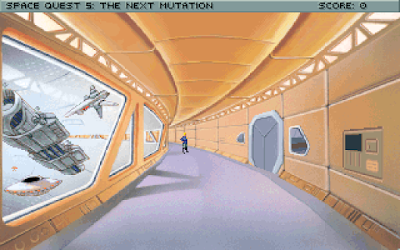 Important, too, to remember that windows aren't necessarily just used to show the outside world. Another shot from Space Quest 5 here, this time with windows acting more as a partition between two man made areas. Livening up corridors in this way is a great method for adding depth and life to what can be quite dull areas in a game, as well as being potential ways to add interesting gameplay. What's really nice here is how the shape and framing of the window really gives the impression of advanced technology, lending itself well to the science fiction nature of the game. 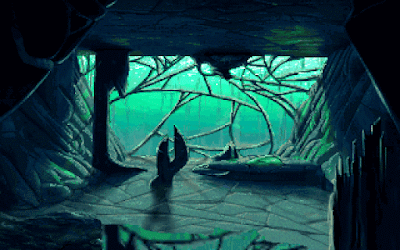 Taken to an even further extreme, this shot from The Dig shows ornate, complex framing that suggests an alien architect very well. The delicate structure feels at once organic and also designed, like the web of a spider, which gives an interesting insight into the mindset of the alien designers. You can also see that this window is the only light source for the scene, making it feel dark and shadowy, with the window becoming a real feature. This is also an interesting shot because the window shows an underwater scene, meaning that visibility is much more limited, and we mostly appreciate the light and colour rather than any specific landmarks. 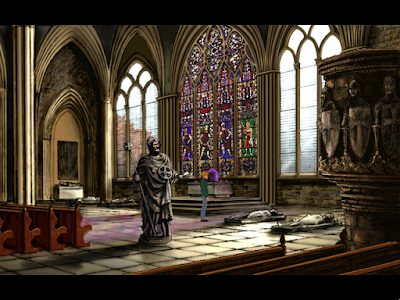 The design of windows is great for suggesting a number of specific environments. Church windows, especially the stained glass scenes that are so iconic of them, are instantly evocative of quiet religious locations. The massive lancet windows in this scene from Broken Sword also flood the scene with white light, which is evocative of holiness, and even their shape feels indicative of a place of worship. 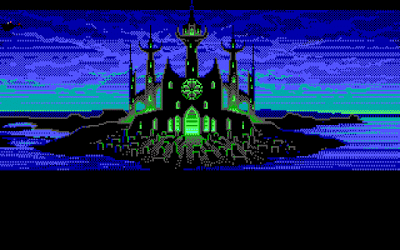 A great example of this is Bishop Mandible's cathedral in Loom. The rose window here instantly provides an impression of a holy place, which is reinforced by the flying buttresses on either side. The juxtaposition formed between these and the sinister spikes and arcane glow makes this a particularly memorable scene, and is a good example of showing how windows aren't merely a source of light for daylight coming in, but also can be used as a source of light when the lit interior of a building is seen from the outside at night. 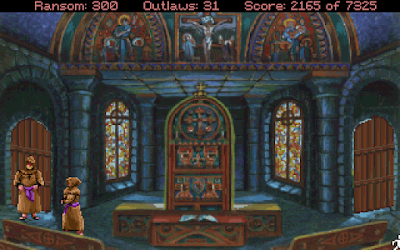 Though many of these church windows are massive, it's the design, not the size, that conveys the idea. This small chapel from Conquests of the Longbow features much milder, simpler arch windows that nevertheless look perfectly at home here. A nice touch here is the suggestion of a crucifix within the shape, helping to reinforce this idea further. 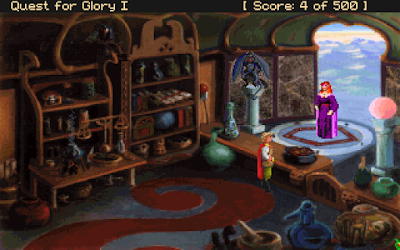 Another great use of shape is this portal from Quest for Glory. Though it could be seen to be as much doorway as window, its fascinating shape feels emblematic of the arcane, and is noticeably different from the rest of the architecture in Spielburg, really giving it that otherworldly feeling. This is further enhanced by the fact that the simple location looks out onto what is, apparently, a cloudy skyscape, as though we're looking in on a totally different world. A really nice way to elevate a magician's building into something much more fantastical. 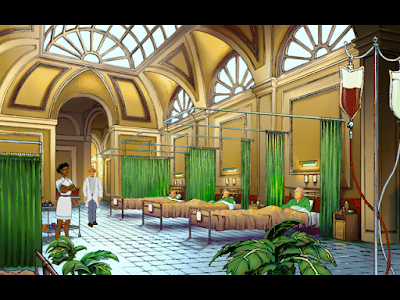 Windows don't need to show us interesting things to be worthwhile, either. The windows in this Broken Sword scene are little more than a source of light, but in filling this function, they also add a great sense of architecture and design to the scene. The arches and curves of these windows really elevates the location to something dynamic and decorative, without the stained glass of a church or any details of the outside world. 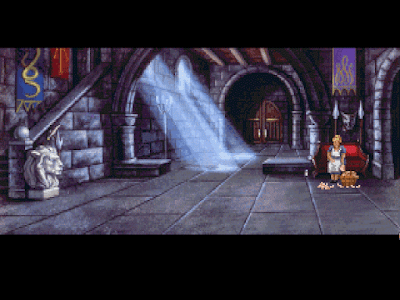 This shot from Gabriel Knight is a great example of windows who don't exist to be seen through - instead, here they're merely a light source, but one that becomes a real focal element of the scene, with the strong light shining through suggesting that it's a very strong source of light. Their presence in the scene is very strongly felt, despite the actual windows themselves being very small.

In fact, we don't even need to show the windows in a scene to suggest their presence. This location in Day of the Tentacle is very clearly lit by a window - we can see the light it casts on the floor - and the window's presence is very strongly felt, without the need to actually put it in the scene. This is often referred to as a "hidden light source" - where we can feel the effects of a light source on a scene, and get a decent idea of where it's coming from, without actually showing the source of light itself. 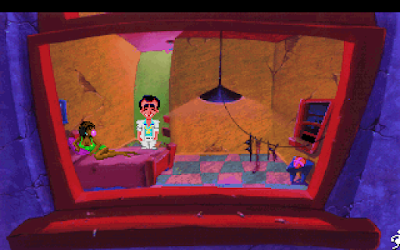 They can also make a great way to frame a scene. This window from Leisure Suit Larry isn't the focus of the scene, but a way to direct the focus. It makes for a great way to decorate the unneeded areas of the area, while also feeling slightly voyeuristic. A really creative, believable way to use up the empty space on the edges of a shot, and an interesting way of putting scenery between the player character and the player, without getting in the way of gameplay. 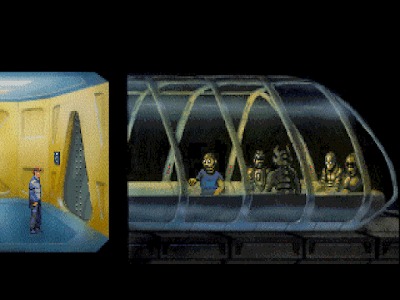 This scene in Universe takes the idea to an even greater extreme, where we're looking through windows at a scene, despite being pulled back from it. This is one of the beauties of windows - even when they're forming a barrier between the characters and us, they still let us interact with the game, and so can be a very useful consideration when trying to add layers of depth to an otherwise very flat scene like this. Once again, the interesting shapes here really gives the impression of a futuristic setting very well.

Finally, even when the presence of windows wouldn't make sense, an artist can break holes in walls and ceilings for their own benefit. This decommissioned ship from Monkey Island 2 is a great example of the lack of windows being worked around by simply adding huge, gaping holes in the ceiling, serving the exact same purpose that a window would, without the need to justify someone installing a window in such an unusual location. Notice how the beams catch light from both the interior and exterior here, a wonderful use of light sources both outside and inside to create a very evocative piece of scenery.

Windows are a fantastic way of playing with a scene - whether it's adding depth, adding light, bringing colour, breaking up a dull wall with an interesting shape, or as interesting framing for players to view the world through. Their uses are incredibly versatile and varied, and well worth exploring in greater detail for anybody interested in adding another layer of beauty to their locations.
Posted by Ben304 at 4:37 AM

Been a huge fan of your work for a long time!

Great series of articles you're running, fantastic idea to look at some of these elements across a wide range of adventure games :)

Would appreciate a shout-out for the source of the Sierra screenshots, very glad to see the site is being useful ;)

Similar but a bit different to some of the points you bring up, sometimes a window is just a window... letting light in... but in a way that colors the whole area and is meant to give a specific feeling to the entire scene:

Thanks Brandon! Yep, the site is super useful, and I need to do a post with where I source screenshots that I don't already have from. It's super appreciated to not have to play all the way through a game to find them!

Great example with the KQ6 shot, too! They're a great source of mood light, for sure - whether it's cosy warm light or mysterious glow from the moon.