I haven't written a post on here for a long time.

The comments were full of spam, the links were dead or dying and there were malware warnings everywhere. I thought about starting a whole new blog, but I like this old thing, so I've sent the old posts back into draft format to hide the dead links and spam, and am writing an update here for the first time in over 3 years.

This blog was started as a place to put my ideas about game design and game art, and updates on my projects. Things have changed a lot since I started this blog; they've changed a lot since I last posted here, even. I quit my day job after Dave and Janet of Wadjet Eye Games asked me to join them as a full time artist and animator, after several years of working part time with them, and I've been making games with them in this capacity since.

It's been fun, challenging, educational and rewarding. These are some of the projects we've done together: 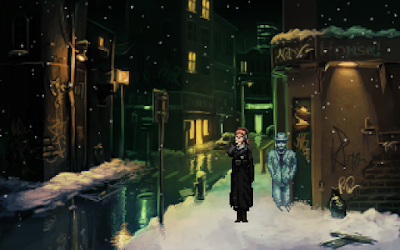 We finished Blackwell Epiphany; the first Wadjet Eye game I did both background and character art for, and the final entry in the Blackwell series. Easily the game I had made the most art for at that point. I began the project uncertain of how well I'd be able to manage working on a game of that scope, I emerged from the project confident that I could easily handle doing that much art for a game. 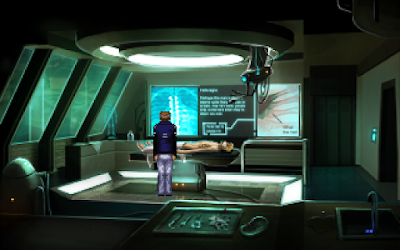 We worked with James Dearden to turn his Technobabylon games into a fully fleshed out story. I'd loved the freeware games he'd put out, and was keen to help him turn them into something bigger. The project saw me having to learn a number of things, including how to paint scenery using 3D models as a basis. 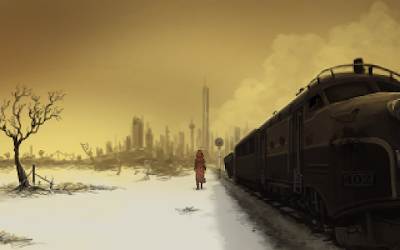 We worked with Francisco Gonzalez to realize Shardlight - a game he and I had been piecing together slowly in bits for several years. It has the distinction of being, most likely, the last game I'll ever make at 320x200 resolution, and is therefore probably the pinnacle of what I could achieve in this many pixels. 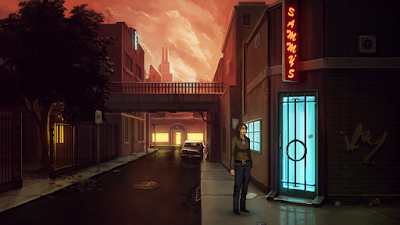 We started Unavowed - Dave's next project after finishing the Blackwell series. After discussing it for some time, we agreed to try working at 640x360 resolution; still sticking to the pixelly graphics that Wadjet Eye is known for, and that I cut my teeth on, but now with a bit more clarity. This project is my main focus at the moment, among other things such as helping with ports and various miscellaneous art assets for things, and it's shaping up to be the biggest project we've ever tackled.

I used to focus on short games, refining my skills and working for a few months at a time on each thing, before releasing it and moving on. It's nice to now be working on more expansive projects; they take longer, but they feel like what I've been working myself up to for years. I want to discuss making them some more, and share some of the things I've learned, am learning, and hope to learn, and that's why I've refreshed this site.

I love the art at the new resolution. Can't wait to see more.

My name is scott and i am leraning pixel art , i am not doing well.
Can i ask how you lear pixel art?
You are amazing.
Thanks.

I have played adventure games since Loom came out. After Lucasarts decided to drop the point and click adventure genre, I've searched high and low for games providing the same level of atmosphere and good graphics. You good Sir, are the one that finally has decended down from the gods of pixelart and carries on the task of providing the world with stunning scenes. I've played Technobabylon and Shardlight and I look forward to play Unawowed. Thank you!!

Loom's a great game, one I love a lot, great premise, great art and interesting, unique gameplay. Glad to hear you've been enjoying the games, and glad to find people that enjoy the work I do! Thanks for the comment.

I can't even describe how fantastic it's that you have spend your time to write these articles and researched this topic! I'm fan of the games you've created art for and also eager to learn to create too! One thing I'm really trying to understand is what 640x360 resolution means in practical use? Is it like when you draw a scene, it's completely made in that resolution and by putting it into normal computer monitor it looks pixelated and that makes that pixelated style? :)